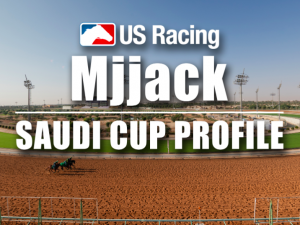 Bred in Ireland, purchased for about $350,000 nearly 18 months ago, the “home team” has a chance to win its own $20 million Saudi Cup at King Abdulaziz Race Course with the longest shot in a field of global stars.

In his previous race, Mjjack won a local stakes called the Custodian of the Two Holy Mosques Cup on Feb. 8, earning an invite to the world’s richest race.

By most accounts Mjjack is quite a wagering risk – 50-1 by usracing.com. However, let’s not forget this nearly-white 6-year-old has won over this track at the Saudi Cup distance of 1 1/8 miles, and is trained here by Sami Al Harabi.

Before arriving in Saudi Arabia, our mystery horse was an average performer in England and Ireland on the turf. But the switch to dirt has turned him into a contender over this track, or so it appears.

Mjjack will have regular rider Abdul Alawfi aboard, but drawing the outside No. 14 post may not work out well.

“I wanted the inside not the outside,’’ Harabi said. “My horse never runs from an outside gate, but it’s a new adventure and a big race, so we have to take it either way.”

Notes: Mjjack will be making his 27th career start, and is 3-for-3 already this year … He was bred in Ireland by Derrymore House Syndicate and is out of the Kentucky-bred Honour and Glory mare Docklands Grace, who raced exclusively in England … sire Elzaam was a stakes winner in Europe and campaigned by Sheikh Hamdan al Maktoum.