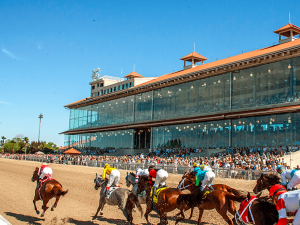 Slang. Jargon. Vernacular. Lingo. These are all terms for a casual dialect spoken locally somewhere. To the outsider it makes no sense, but to the insider it is crystal clear. For example, here in New Jersey we don’t go to the beach, we go “down the shore.” We go to “the city”, which is either New York City or Philadelphia depending on whether you identify with North or South Jersey.

The track also has its own unique slang terms. I remember standing by the paddock at Monmouth Park one sunny, August afternoon with Newbie Nick. As I was explaining some of the physical traits I look for in a contender, our good friend Rail Guy bellied up to the rail.

“No way dat bug boy comes from dat bullring and rides dis morning glory chalk here dropping in for a tag, bet he gets hung on the first turn and struggles to cover da last panel and if dose odds go any lower all da bridge jumpers will be out,” Rail Guy proudly boasted as Newbie Nick stared at him like he was speaking Mandarin.

As Rail Guy looked down to his program mumbling to himself, a bewildered Newbie Nick turned to me with a glazed expression that said “what did he just say?” I had some explaining to do and not just the words that Rail Guy used, but other popular racetrack slang.

A “bug boy” or “bug” is an apprentice rider. Apprentice riders are granted a weight allowance off of the race requirements based on the number of wins they have until they are no longer an apprentice. The term comes from the asterisk that would appear next to the apprentice jockey’s name which looked a bit like a bug.

This is the term for a bettor who places huge show bets on a huge favorite. Often a big favorite that is 1-5 or lower will take a larger portion of the show pool than they will of the win pool. This often results in a negative pool where the track will lose money but is required to pay out the minimum of $2.10 for a $2 show bet (with some tracks requiring $2.20 as a minimum payout). When they win these bets they get their 5 percent return, but when they lose and finish out of the money the resulting show payouts on the rest of the field can eclipse the win bet payouts. The term reflects what the guy may do on his way home after dropping his life savings on Glue Factory in the fifth race only to see him unseat the rider and finish out of the money in a five horse field as the 1-9 favorite

Not all tracks are created equal. Most of the higher level tracks are a mile or longer around. Some of the smaller circuits run on tracks that are less than a mile around and are called bullrings. Charles Town in West Virginia and Delta Downs in Louisiana are both examples of bullrings that are six furlongs around.

The favorite. This term originates from when on-track bookmakers used to write current odds on a chalkboard.

Get your mind out of the gutter. In horse racing this means that a horse does not advance its position when called upon by the jockey. All right, so only the geldings are jealous about this one.

It isn’t just what covered the walls in your grandparent’s musty basement. In horse racing it refers to a furlong which is an eighth of a mile.

Sharps are people who play the races for a living or are very serious about it. Squares are casual or recreational bettors. The difference is often the amount each wagers, how serious they are about wagering, and how much they let emotions play into their decisions. Sharps are all business while squares will let Track Handicapper Tony or the drunk at the end of the bar play into their decisions.

This is the claiming price a horse is in for in this race. Often you’ll hear an analyst say a horse is “dropping in for a tag today” which means he is leaving allowance company to race under a set of conditions where he can be claimed for a certain price tag if someone wants to buy him.

The next time you go to the track, know the slang that horseplayers speak. It can be amusing to hear the terms they use. What are your favorite horse racing slang terms?