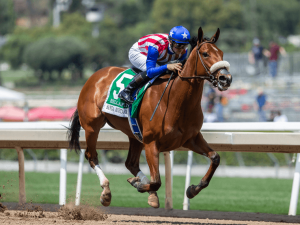 The return of racing to Santa Anita this week also marks the return of stakes action at The Great Race Place, with two carded for the Saturday program and one – a Grade 3 – set for Sunday. Post time for both days has been set at 12:30 p.m. PT.

In the first added-money of the day on Saturday, the $150,000 Evening Jewel Stakes – named for the California-bred champion and millionaire – 10 state-bred sophomore fillies will sprint 6 furlongs on the main track. The race is part of the rich Golden State Series of stakes events for California-bred foaled or sired runners which is stretched out throughout the year and held at all the state’s tracks.

Bulletproof One is the 5-2 morning-line favorite making her return to Southern California and two wins on the Tapeta surface at Golden Gate Fields in allowance events in March. The daughter of Idiot Proof, who is trained by Peter Miller, is a need-the-lead type and while she does seem to do her best running on grass, if jockey Abel Cedillo gets a clean break the rest of the field may have trouble catching her before the wire.

Ben and Sally Warren’s homebred Warren’s Showtime carries a prominent pedigree as she’s by Clubhouse Ride and out of Grade 1 winner Warren’s Veneda (Affirmative). The Craig Lewis-trainee is coming off a win in the grassy China Doll Stakes on March 7 and is also riding a two-race stakes winning skein. She has only been off the board once in her seven-race career, with four wins, and though turf seems to be her preferred surface, she has some success in stakes company on the main track.

“It’s not my preference, but she’s been cooped-up so long and she’s just got to run,” Lewis said. “She’s much better going two turns on grass, but that said, good horses do good things.”

Been Studying Her hasn’t raced since beating just one as the favorite in the grassy Cal Cup Oaks back in January. She makes her first start for trainer Art Sherman in her return to dirt, which is clearly her preferred surface.

The Evening Jewel Stakes is the day’s eighth with a post time of 4:08 p.m.

The Echo Eddie Stakes, run under the same conditions as the Evening Jewel except for sophomore colts and geldings, actually claims a filly as its favorite.

Red Barron’s Barn and Rancho Temescal’s Big Sweep, making just her second start after breaking her maiden two months ago by 2 ½ lengths, faces eight winners for the first time in her stakes debut. The daughter of Mr. Big, who is trained by Mark Glatt, hasn’t missed a beat in the mornings since the pandemic shut-ins began and drew top jockey Flavien Prat back for a repeat assignment.

“We nominated to both races (including the Evening Jewel) and to be honest, we looked at the noms for both of them and we just thought that maybe our best chance this time is against the boys,” Glatt said. “She’s obviously very talented and hopefully, we chose the right option.”

Speed seems to be her weapon, so expect her to head straight to the front from the gate.

Phantom Boss, who made a splash when winning the Bashford Manor Stakes (G3) at Churchill Downs a year ago, makes a return to action after a troubled trip in the I’m Smokin Stakes at Del Mar eight months ago. The son of Shackleford has a win and a second from two starts at Santa Anita and will be dangerous if trainer Jorge Periban has him sufficiently ready.

Bettor Trip Nick hasn’t ever finished worse than third in six career starts, but seems to like the all-weather surface of his home track Golden Gate Fields. The Craig Lewis-trained Club Aspen, a son of Clubhouse Ride, has raced exclusively in stakes company with mixed results since breaking his maiden at Del Mar last August. He hasn’t ever won at Santa Anita, but has earned a victory from three starts at the distance.

Bellafina is certainly a horse for course, having won four of six starts with two seconds over the main track, which includes a runner-up finish to champion Covfefe in the Breeders’ Cup Filly & Mare Sprint (G1) last Nov. 2. She last raced at Oaklawn three weeks ago where she was a well-beaten fourth in the Carousel Stakes at Oaklawn Park, leaving trainer Simon Callaghan to go back to the old drawing board.

“I think it’s just a race you have to draw a line through,” Callaghan said. “Nothing really went right, but she’s come back and we know she loves Santa Anita. Flavien (Prat, who returns to ride after a two-race absence) breezed her and said she felt as good as ever.”

Mother Mother, who hails from the barn of Hall of Famer Bob Baffert, hasn’t raced since mid-February after finishing a game second to the one-eyed wonder Hard Not To Love in the Santa Monica Stakes (G2). The daughter of Pioneerof The Nile likes this distance (won her only 6-furlong start) and has been on the board for three of five starts at Santa Anita, and hasn’t missed a beat when training in the mornings. Her last bullet work in :59 4/5 was reported to be an exceptional move.

Her stablemate Fighting Mad makes her return after nine months on the shelf and in her first start since winning the one-mile Torrey Pines Stakes (G3) at Del Mar last summer by eight lengths. She’s never raced at Santa Anita, though it’s her home track, but she has a win and a second at three starts at this three-quarter-mile distance. Drayden Van Dyke will be back aboard.

The Desert Stormer is Sunday’s eighth race with a 4 p.m.