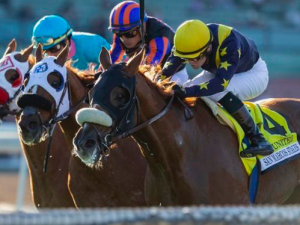 It’s safe to say that anyone involved or interested in horse racing that doesn’t know who Charlie Whittingham was could probably do some extra research.

The Hall of Fame trainer, who managed the care of racing legends such as Sunday Silence, Ferdinand, Exceller and hundreds of other stakes winners and champions over a nearly 50-year career, still remains the gold standard — along with a short list of names like Fitzsimmons, Stephens, Nerud, Lukas, Frankel and Baffert — by which all trainers will forever be judged.

Known as “The Bald Eagle” for obvious reasons, Whittingham is memorialized in a bronze bust alongside one of his beloved Australian shepherds, Toby, at Santa Anita where on Saturday his legacy will be honored with the 52nd running of the Charles Whittingham Stakes (G2).

The 1 ¼-mile turf test was first contested in 1969 across town at the now defunct Hollywood Park as the Hollywood Invitational Handicap and at 1 ½ miles. Whittingham saddled seven winners, including Cougar II, Dahlia and Exceller before the distance was changed to the current one in 1988 and its name to the Hollywood Turf Handicap in 1989.

The race was named for Whittingham a decade later and just a few months after he passed away in 1999. It will be run again this year for the seventh time at Santa Anita and carries a $200,000 purse.

In addition to the legends trained by its namesake to have won, the more notable names to have earned a spot in the record books as the winner include John Henry (three times), Steinlen, Bien Bien, Lava Man and Acclamation (three times). Fellow Hall of Famers Bobby Frankel and Neil Drysdale also saddled seven winners each and Gary Stevens booted home six winners over his Hall of Fame career.

This year seven will go postward, including Breeders’ Cup Turf (G1) runner-up United, who will be back in action after a coronavirus-related aborted attempt to make the Dubai Turf (G1) — he made the trip to the Middle East and back without racing. The LNJ-owned son of Giant’s Causeway hasn’t raced since winning the San Marcos (G2) on Feb. 1, but is in capable hands with trainer Richard Mandella, who won this race in 1996 with Sandpit. United has a win from three starts at this distance, likes Santa Anita’s turf course (7-2-2-1) and will have regular jockey Flavien Prat – who won six races on Sunday’s card – back aboard. He’s the early favorite, but for a reason.

Eclipse Award-winning trainer Chad Brown ships the well-traveled Irish-bred Rockemperor to challenge and the French-raced son of Holy Roman Emperor will be seeking his first North American win in his fourth start stateside.

He has earned a pair of thirds in this country, both in graded stakes company, and seems suited to be competitive here. Brown would not send a horse, including top jockey Irad Ortiz Jr., if he didn’t have a reasonable belief his charge had a shot. He will need pace, but he should not be discounted considering his connections alone.

Originaire, who will be saddled by Jeff Mullins, has done his best racing from a mile to nine furlongs on the turf and tackles this distance for the first time.

The Irish-bred son of Zoffany likes the Santa Anita lawn and is coming off a nice allowance win two months ago, and has been training well since. If he overcomes the question of handling the distance off the forced layoff under Umberto Rispoli, he is dangerous for the mild upset.

Desert Stone won the San Gabriel (G2) two back but was a horrible ninth of 10 in his last start in the Kilroe Mile (G1) more than two months ago. He may not love the distance, but he loves this turf course (10-3-1-2) and has success running off a layoff. Abel Cedillo picks up the mount.

Multiplier hasn’t won in a long time, but he has been consistent in placing in graded events both on the turf and dirt, including the Santa Anita Handicap (G1) two races back. He figures to be competitive for a piece if his runs his best in his return to turf.

Synthesis has started a couple of times on the turf without success and while he is certainly a talented and useful horse, this son of First Samurai seems overmatched. His stablemate, Bold Endeavor, also has a winless record (0-for-4) on turf and seems a more useful runner in non-graded or allowance events.

Post time for Saturday’s Charles Whittingham Stakes is 4:18 p.m. CT and has been carded as the 10th on the day. The weather is expected to be clear and warm with afternoon highs in the upper-70s.

The field, in post-position order, with jockey, trainers and morning-line odds: