The popular Panamanian has been among the top 10 jockeys over the past five years nationally, he’s finally moved to the head of the class by winning his first riding title at Saratoga Race Course, the 40-day summer meet considered the most prestigious in the world.

He did it in style, too, ending a six-year run of riding titles by the Ortiz brothers with 64 wins – eight more than runner-up Irad, Jr., and four off the Spa record of 68 set by Ramon Dominguez in 2012. 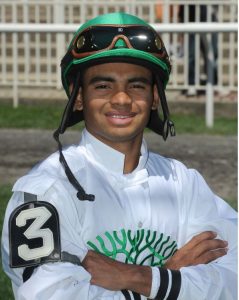 The 29-year-old won the Jim Dandy (G2) and Travers (G1) aboard top 3-year-old Essential Quality, along with a slew of Grade 2’s and 3’s, maidens, allowances, and claimers. He won on the turf and on the dirt, and he’s enjoying the best year of his career.

“You see how tough it is to win a race here. To win 64 races, it’s wonderful,” Saez told the NYRA press office. “I’m so thankful to the trainers and thanks to Kiaran (agent Kiaran McLaughlin), who did a great job.

“Nothing is impossible. We came here and were patient and rode our horses to win, and we did it. We’re so happy to be here.”

To put perspective on Saez’s achievement at the Spa, 19 of his 64 winners were favorites. In addition, he led all riders with 14 wins aboard 2-year-olds and is likely to have his choice of 3-year-olds in the 2022 Kentucky Derby.

Speaking of the Kentucky Derby, Saez was guy who rode Maximum Security in the 2019 Run for the Roses. It would have been his first Derby victory, first Triple Crown race win, but after an excruciating 22-minute post-race inquiry, Maximum Security was disqualified for interference with several horses in the stretch, and runner-up Country House was declared the official winner.

Trainers are always looking for riders to fit their horses, and Saez is a popular choice of many – he won stakes at the Spa for no less than six different trainers — Brad Cox, Todd Pletcher, Mike Maker, Norm Casse, H. James Bond, and Rudy Rodriguez.

“He gives horses a chance,” McLaughlin, who retired from training and became Saez’s agent in 2020, told the “Daily Gazette” last month. “He’s forwardly placed often, breaks well from the gate and tries hard on every one of them, which I think is neat. He doesn’t fold up. And he rides both turf and dirt very well. He’s a pleasure to work with.”

Saez’s spa totals were 64-45-39 from 336 mounts, with purse earnings of $6.2 million. Not only was this his first Spa title, it was his first on the New York Racing Association circuit, which also includes Aqueduct Racetrack and Belmont Park.

“This is a tough spot, so winning this title is everything,” Saez said. “To win the Travers; racing at NYRA is the biggest deal right now, and we’re so blessed to be here. It means a lot.”

The Belmont fall season is up next for Saez, married, and the father of two. He’s looking for another successful meet leading into the Breeders’ Cup at Del Mar on Nov. 5-6 when he will be aboard Essential Quality in the $6 million Classic.

Right now, he is ranked third nationally in earnings with $18.5 million, behind leader Joel Rosario and Irad Ortiz, Jr., and has ridden 207 winners as of Sept. 8. While he won his first Triple Crown race in 2021 – the Belmont Stakes (G1) with Essential Quality, he’s hoping to capture a top year-end honor – an Eclipse Award as the nation’s top jockey.