Finishing second in two graded stakes on the same day at Royal Ascot is a notable achievement. For trainer Wesley Ward, it’s gratifying but not quite good enough. Ward has had 10 winners at the world’s greatest race meeting, and on Friday he came close to getting two more.

Pacesetter Golden Pal, a 12-1 shot ridden by Frankie Dettori, was caught in the final strides and lost by a neck to The Lir Jet in the Group 2, 5-furlong Norfolk Stakes for 2-year-olds, part of the Breeders’ Cup “Win and You’re In” series. Earlier in the day, Ward told NBCSN that Golden Pal was “my best chance this week” in an interview from Keeneland. NBCSN subsequently reported that Golden Pal will be pointed to the Group 1, 5-furlong Nunthorpe Stakes on Aug. 25 in York, England, with champion Irad Ortiz Jr. scheduled to ride. 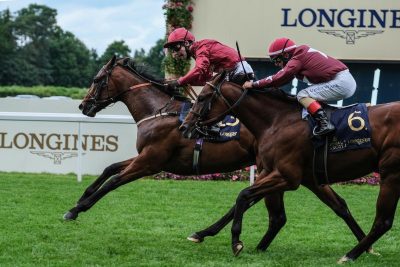 The Lir Jet at Norfolk Stakes- Photo Courtesy of Racenews

The Lir Jet earned a spot in the Juvenile Turf Sprint on Nov. 6 at Keeneland.

An hour later, Ward’s 3-year-old colt Kumari ran second for the second year in a row on a rain-softened course at Ascot, losing by a neck to Golden Horde in the 6-furlong, Group 1 Commonwealth Cup. Last year, Kumari and John Velazquez led the Group 2 Queen Mary Stakes in a driving rain before tiring in the final furlong. After Dettori beat them by a head that day on an 18-1 shot, he apologized to his friend Ward, who replied, “Oh, I bet you are.”

Kumari was expected to lead Friday’s Commonwealth Cup but came out of the gate awkwardly, forcing Dettori to teach the confirmed front-runner a new trick on the fly. They gradually moved into contention but couldn’t get past Golden Horde.

Ward’s first runner of the day, the 2-year-old filly Flying Aletha, lived up to her name as she blasted from the gate and led until the furlong marker in the Group 3 Albany Stakes. She tired badly, dropping back to 10th of 13, beaten 13¼ lengths.

Earlier in the meeting, Ward ran eighth and ninth with his first two runners, so he’s 0-for-5. Last year he was shut out for the first time since 2012. On Saturday he will have two chances for his 11th Royal Ascot victory when Campanelle and Royal Approval go in the Queen Mary, which Ward has won three times.

Ward, a Royal Ascot regular since 2009, stayed in Kentucky because of COVID-19 travel restrictions. So did Maryland-based Graham Motion, a transplanted Englishman who will run his standout 3-year-old filly Sharing at a mile in Saturday’s Group 1 Coronation Stakes, one of the meeting’s marquee events.

Another lady in the last

For the second consecutive day, a woman rode the winner of Ascot’s final race. Hollie Doyle, a 23-year-old native of England, came from off the pace to take the Duke of Edinburgh Stakes with 33-1 shot Scarlet Dragon.

It was Doyle’s first win at the Royal meeting.

“This means a huge amount to me,” she told NBCSN. “You walk into Ascot every year with really high hopes and try to picture in your head what it’s like to ride a winner here, but it’s very hard to come by winners, as I have learned. This was amazing for me.”

On Thursday, Hayley Turner won the Sandringham Stakes for the second year in a row. Her 2019 victory was the first by a female jockey at Royal Ascot since 1987, when Gay Kelleway made history at a meeting that started in 1711.