One final run for Knicks Go and then it’s off to his retirement home at Taylor Made Stallions in Kentucky. 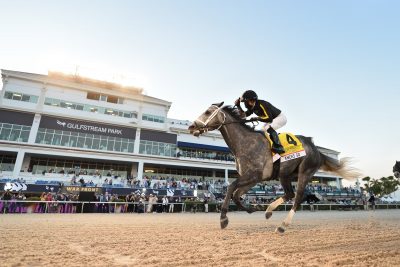 The 2021 shoo-in Horse of the Year is the star attraction in a field of nine entered Tuesday for the $3 million Pegasus World Cup Invitational (G1) on Saturday at Gulfstream Park.

The striking gray 6-year-old was installed as the 6-5 favorite to win the 1 1/8-mile Pegasus for the second year in a row. The relentless front-runner drew the rail. Life Is Good poses the toughest challenge and is the 7-5 second choice, with the rest at double-digit odds.

But this is the Knicks Go show heading into his 25th and final career start for Korea Racing Authority. Trained by Brad Cox, Knicks produced a stellar 2021 campaign that ended with four straight victories, including the Breeders’ Cup Classic (G1) at Del Mar on Nov. 6. Joel Rosario will be aboard once again, and both Cox and Rosario are also expected to win Eclipse Awards when they are announced on Feb. 10. In addition to Horse of the Year, Knicks Go is the likely the Eclipse winner as older dirt male.

He is in great shape, too, following a Sunday breeze at the Fair Grounds in New Orleans.

“I’m excited, but it’s bittersweet it’s coming to an end,’’ Cox said. “He’s been very special to us.”

Life Is Good, trained by Hall of Famer Todd Pletcher, is pretty special as well. Formerly trained by Hall of Famer Bob Baffert, Life Is Good was moved to Pletcher’s barn last summer and hasn’t missed a beat – he’s a neck shy of a 6-for-6 record, a defeat to Jackie’s Warrior in the H. Allen Jerkens Memorial (G1) at Saratoga on Aug. 28. He then won the Kelso (G2) and the Breeders’ Cup Dirt Mile (G1).

The 4-year-old drew post 4 and will be ridden by Irad Ortiz, Jr.

The two favorites love to take charge from the outset, so it should be a duel from start to finish if form holds true.

Like Knicks Go, Life Is Good has been training brilliantly. Pletcher is upbeat about his chances after his 5-furlong breeze in 1:00.36 on Saturday at Palm Beach Downs. “Just another super work this morning,” Pletcher said. “Looked awesome, finished up really strong, galloped out great. I had him shading 23 [seconds] the last quarter.”

The fields for the top races on an outstanding undercard also were drawn. Defending champ Colonel Liam, also trained by Pletcher and ridden by Ortiz, is the 3-1 favorite in a field of 12 for the $1 million, 1 1/8-mile Pegasus World Cup Turf. His stablemate Never Surprised is the 7-1 third choice, with trainer Chad Brown’s Sacred Life (6-1) second in the odds. 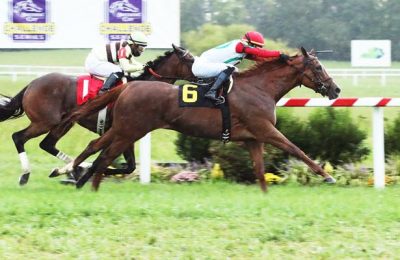 The Pegasus World Cup Invitational was first contested in 2017. Originally established as the world’s richest race with a purse of $12 million, the Pegasus was a race where owners could buy in to the starting gate for $1 million per runner. Arrogate won the first edition, defeating the popular California Chrome. In 2018, the purse was worth a staggering $16 million, and Gun Runner made it the second year in a row that the Breeders’ Cup Classic winner came back to succeed in the Pegasus.

After a purse reduction to $9 million in 2019, the Pegasus World Cup has settled at $3 million, and the runners are now invited by track officials. As horses are confirmed or their invitations are declined, the track puts out another list of invitations. This ensures that Gulfstream Park is getting the very best field it can assemble.