Odds Against New Shooters in the Preakness

There is certainly a buzz around Medina Spirit’s wire to wire win in the Kentucky Derby and subsequent drug test results. Whether Medina Spirit runs or not, the Preakness Stakes offers an interesting handicapping dilemma for both the novice and those who make their living playing the races.

Should I back a new shooter in the Preakness Stakes?

The filly Swiss Skydiver did it last year after winning the Kentucky Oaks in similar fashion to how Rachel Alexandra beat the boys back in 2009. The difference here is that the 2020 pandemic Preakness was run in October instead of May, which allows for the development gap to narrow between colts and fillies.

Since the 1980’s, the number of horses running in both the Kentucky Derby and the Preakness has dropped from 60% to about 43%. You would assume this would increase the chance of a new shooter winning, but that number hasn’t changed from decade to decade. 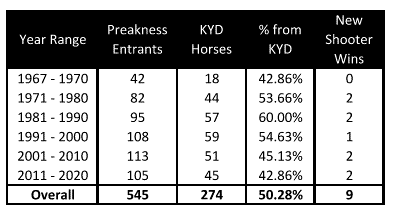 The 2021 Preakness, however, looks to be a field of 10, with only three Kentucky Derby runners returning – winner Medina Spirit, sixth-place finisher Midnight Bourbon, and seventh-place finisher Keepmeinmind. 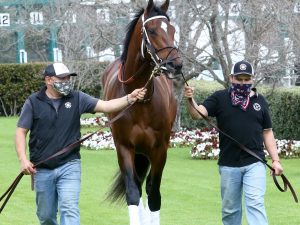 Of the seven remaining races where a new shooter won, on average 52% of the field has been returning from the Kentucky Derby with a minimum of 33% and a maximum of 71% of the runners returning.

What will a new shooter need to do to win?

Come from off the pace.

The pace needs to be challenged. Whether it is Medina Spirit, Midnight Bourbon, or new shooter Concert Tour, there will be enough early pace to set up for a late run. It doesn’t appear that returning Kentucky Derby horse Keepmeinmind is the horse to benefit from an early pace.

Over the last 54 Preakness Stakes, off the pace horses have dominated. Nearly three quarters of the winners have been pressers, stalkers or closers. Early speed horses have only managed to win 16.7% of the races. The last four early speed winners were Justify (2019), American Pharoah (2015), Oxbow (2013), and Rachel Alexandra (2009).

It takes an impressive horse to win the Preakness on the front end.

Which new shooters could win the Preakness?

Concert Tour finished third in the Arkansas Derby last out but seems to want the lead. He could pressure Medina Spirit or Midnight Bourbon but may not have what it takes to win this race. He is also a likely candidate to set the pace, which hinders rather than helps his chances.

Rombauer was third in the Blue Grass after winning the El Camino Real Derby at Golden Gate. Last fall he finished fifth behind a slew of Kentucky Derby runners in the Breeders’ Cup Juvenile. His running style and hidden class off that troubled trip in the Blue Grass may make him a viable option here.

Crowded Trade is another late runner who finished third in the Wood Memorial after a wide trip and was second in the Gotham Stakes. He looks to be a viable option here from off the pace.

Ram is an off the pace runner who broke his maiden in a $50,00 maiden claimer and then peeled off a win in an allowance race on the Kentucky Derby card in a one-turn mile. Class is a question with a horse that needed eight tries to break his maiden. Not the most likely candidate to pull the upset here.

Unbridled Honor benefited from a fast pace in the Lexington to get up for second to King Fury over a sloppy track. He is another late runner that could benefit from a fast pace and should improve greatly from that last start.

Chad Brown trainee Risk Taking had a solid stalking trip in the Withers only to come up flat in the Wood Memorial, finishing seventh. Expect him to rebound here, but it is questionable how much more forward this colt moves against this field.

Who will upset the pace in the Preakness Stakes?

Will a new shooter win the Preakness Stakes?

This year looks more likely than in the past. One thing is certain; the early pace will be contested in Baltimore. For any of the early speed horses in this race to win they will need to show tactical speed, benefit from a troubled trip from the other speedsters, or prove that they are a far superior horse.