Oaklawn Park Handicapping: Coronavirus has wreaked havoc on the March and April racing calendar far and wide, but one place that so far has steadfastly kept most of its original four-day-a-week spring racing schedule in place – much to the relief of simulcast players everywhere – is Oaklawn Park. 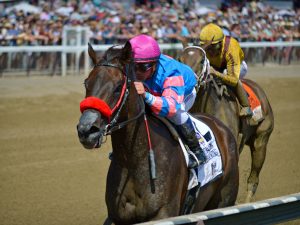 Hopefully, the track will continue to plug away more or less with a full dance card through the meet’s closing day on Saturday, May 2. At a time when horseplayers have been unable to depend on much, Oaklawn Park continues to offer handicappers some of the best live horse racing available.

With the exception of some changes Oaklawn made to the stakes schedule, including moving the Arkansas Derby (G1) from what would have been Saturday to May 2, which would have been Kentucky Derby day, Oaklawn racing remains basically unchanged from its original planned schedule.

That’s important in light of what’s happening elsewhere around horse racing, with the April Keeneland meet canceled, Fair Grounds closed for the season, and no racing this spring in places like New York where Aqueduct is being turned into a makeshift hospital, and Chicago, where Hawthorne had always planned to close this season in order to build its new racino. Racing fans even lost Santa Anita when Los Angeles County shut its doors for at least a few weeks.

Gulfstream will continue racing. Until now GP has been the nation’s leading simulcast signal this spring, but the Florida Derby was run last Saturday, along with the mandatory payout of the Rainbow 6, and Gulfstream’s “Championship Meet” officially ended. The spring/summer Gulfstream meet ordinarily is not nearly as strong as the winter meet.

The best part of the meet is upon us. The purses are massive. Louisiana racing and Texas racing are closed, and Oaklawn is loaded with horses from all over the region that are ready to race. Field sizes are expected to soar. If you haven’t already, now is the time to start focusing your handicapping on Oaklawn Park.

We now have more than two months of data to analyze from the current Oaklawn meet. A lot of trends have already taken shape that can help handicappers narrow big fields and separate contenders from pretenders.

Let’s start by looking at a key post position bias, which of course has no turf races and runs the majority of its races at three distances, 6 furlongs, one mile, and 1 1/16 miles on the main track.

Go with the outside flow

For much of the current Oaklawn meet, there has been a noticeable outside flow to many of the races, particularly in sprints and at 1 1/16 miles. Outside paths have been preferable on some days, and it hasn’t been uncommon to see exactas like 12-11 or 8-9. Outside trips have thrived at the meet except at one mile.

In routes, the races have played very differently at the distances of 1 1/16 miles and one mile (which used the alternate first finish line). In 1 1/16-mile routes, races have tended to show the beneficial outside flow to them that has often prevailed this season.

This has led to similar win percentages across the starting gate from inside, middle, and outside draws similar to what we see in sprints. This is key, because outside horses in Oaklawn two-turn races tend not to get bet as much. This means there are plenty of outside-drawn bargains to be found in 1 1/16-mile races.

This is not true whatsoever at one mile, however, where horses breaking from posts 1-6 have dominated, and there is a sharp drop-off in effectiveness starting at post 7. In 50 races run so far at this meet at one mile, just 16 percent of the winners (eight combined wins) have come from posts 7 and out. Posts 1 through 6 win at an average of 14 percent apiece.

Horses breaking from posts 7 through 12 have won at an average clip of just 5 percent (eight winners from 163 starters from those posts).

In the post position stats for 6 furlongs, horses from all parts of the starting gate all the way out to post 12 have been winning for similar percentages. This reality is another blow to the chances of those horseplayers who only bet inside horses at Oaklawn, or those who have noticed the track’s outside flow this season and started wagering too heavily on outside horses.

In terms of running styles, early speed horses and pressers that race on or within two lengths of the early lead have the preferred running style at each of Oaklawn’s three most commonly-run distances, 6 furlongs, 1 mile, and 1 1/16 miles, due to Oaklawn’s one-mile track layout and relatively short stretch run in comparison to other tracks (with an even shorter stretch run at one mile).

According to stats dating back to the 2018 Oaklawn meet, 6 furlongs is the kindest common distance toward front-runners, who enjoy roughly a 30 percent winning percentage.

There’s one more month of great racing at Oaklawn, and the best part of the meet still lies ahead so don’t overlook this high-quality spring meet. Factor Oaklawn’s prevailing track biases toward post positions and running styles into your handicapping, and you will have a big leg-up on many of your fellow horseplayers. Best of luck!

If you enjoyed our most recent piece on Oaklawn Park Handicapping, check out other articles at our horse racing news section!