Next stop Travers at the Spa for Team Tiz the Law

It’s on to the Travers for Belmont Stakes winner Tiz the Law.

A day after his 3-year-old star overpowered the field in 2020’s first leg of the re-jiggered Triple Crown, trainer Barclay Tagg – and partner and assistant Robin Smullen – discussed plans for their New York-bred to show up next in the $1 million Travers (G1) at Saratoga Race Course on Aug. 8.

“I’ve never won the Travers and I want to win it,” said Tagg, who at 82 is now the oldest trainer to win the Belmont. “It’s very important to me.” 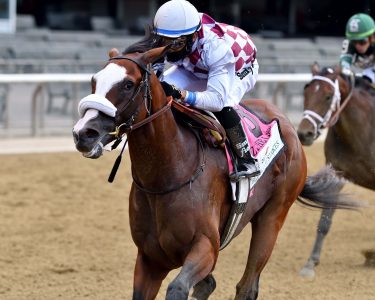 In his 49th year as a trainer, and based at Belmont Park, Tagg said Sunday that Tiz the Law came out of the race in good order. He and Smullen talked about what’s on tap for the colt owned by Saratoga Springs-based Sackatoga Stable.

“He’ll walk for three days and we’ll graze him every afternoon like we do,” said Tagg. “The fourth day we’ll take him out and jog him once around backwards to see how he moves and how he is and if he eats up that night we’ll go to galloping. And 10 days after that we’ll give him an easy breeze, a half-mile.”

From there, it’s on to Saratoga, with the meet opening on July 16. The 1 ¼-mile Travers, usually run late in August, was rescheduled to be a setup before the Kentucky Derby, now scheduled for Sept. 5 after being postponed from May 2 due to the coronavirus pandemic. The Preakness, the final leg of the Triple Crown, is Oct. 3.

Tiz the Law, 5-for-6 with three Grade 1 wins (Champagne, Florida Derby, Belmont Stakes), “came out of the race great,’’ said Smullen. “He ate up and then he came out and grazed for an hour. His legs are good, his attitude and energy are good.”

Tagg paid tribute to Smullen for her talent and tenacity.

“I’ll say it – he’s been handled perfectly, too,’’ said Tagg. “I’ve had Robin ride him and Robin can ride anything. She’s a brilliant horsewoman and I can’t say enough about her. She has the heart of a lion, the judgment of Solomon and the patience of Job.”

Tagg and Sackatoga Stable teamed up in 2003 when Funny Cide won the Derby and Preakness but came up short in the Belmont. Tagg and Smullen now have their own Triple Crown.

Smullen said Tagg is such a stickler for details he instructed jockey Manny Franco – riding in his first Belmont – how to handle a victory celebration.

“Barclay told him not to be jumping around on the horse. Sometimes they shift their weight (in the saddle) and it’s bad,” said Smullen. “So Barclay said to Manny, if you’re winning, don’t do that. Just don’t. That’s the stuff that nobody thinks about, but he does. It might be the difference between making the next race or not making it.”

Franco gave a fist pump or two and let out with a yell after Tiz the Law crossed the finish line.

Travers or Haskell could be next for Dr Post 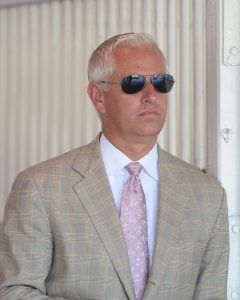 Belmont runner-up Dr Post could run next in the Travers (Aug. 8) or come back sooner in the Haskell Invitational at Monmouth Park on July 18.

Trainer Todd Pletcher told the NYRA press office, that “both of those races are in play. It just depends on how he bounces out of the race. We were always confident that a route of ground will not be an issue for him. He finished up well. It was a very encouraging effort.”

Dr Post finished 3 ¾ lengths behind Tiz the Law in just the fourth race of his career. As for Farmington Road, a distant eighth in the Belmont, Pletcher said “we’ll have to find a track that’s more kind to closers.”

Big weekend ahead at Belmont

Four graded stakes are set for Saturday (June 27) at Belmont Park, topped by the $250,000 Just a Game (G1) that likely will include Got Stormy, Newspaperofrecord and Rushing Fall.

Probables for the New York include Call Me Love, Fools Gold, Kelsey’s Cross, Mean Mary, My Sister, and Valiance.

The $100,000 Vagrancy (G3) is on the card, too. Probables include A Bit of Both, Chalon, Come Dancing, Mother Mother, and Royal Charlotte.

Mott watched the race on his cellphone from Belmont Park, where Modernist ran seventh in the Belmont Stakes.

“I’ve spent a lot of time in Kentucky, so it was good to win it there,” said Mott, who campaigned two-time Horse of the Year Cigar as well as Country House (second in the 2019 Derby but elevated to the winner when Maximum Security was disqualified from first to 17th for interference).