A wet and wonderful Saturday of thoroughbred racing from Churchill Downs in Kentucky to the Curragh in Ireland produced favorites coming through as well as long shots posting huge upsets.

In the end, we’re left with two words to in wrapping it all up: Midnight Bisou. 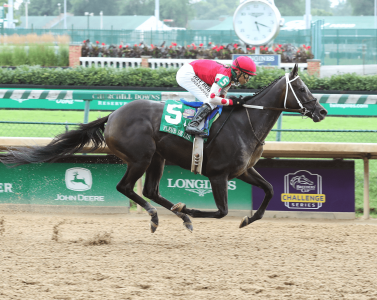 The magnificent 5-year-old mare put on an astonishing dash to the lead around the far turn and ran off to a 8 ¼-length victory in the $200,000 Fleur de Lis (G2) at Churchill Downs.

The win gave the 2019 champion older female trained by Hall of Famer Steve Asmussen an automatic berth into the Breeders’ Cup Distaff (G1) at Keeneland in November, and also signaled she’s back to her winning ways after runner-up finishes in her previous two starts.

Those races were the 2019 BC Distaff (second to Blue Prize) and the $20 million Saudi Cup against the boys (second to Maximum Security) on Feb. 29.

“She’s a really special mare,” said Asmussen, who won four races Saturday to take a 746-742 lead over Dale Romans for most wins by a trainer at Churchill Downs. “To come back, in that sort of style, is just tremendous. She has such an amazing talent and such a great relationship with Mike (Smith). She beat a wonderful-looking group of mares. We have nothing but respect towards them.”

Under Hall of Famer Mike Smith, Midnight Bisou was cruising along in fifth along the backstretch in the field of seven fillies and mares, with 2019 Kentucky Oaks (G1) winner Serengeti Empress setting the pace as expected. Then came the move. Midnight Bisou closed to third entering the far turn and then blew past Motion Emotion and Serengeti Empress and just like that she was about six lengths ahead in the stretch.

Sent off as the 1-2 favorite, Midnight Bisou returned $3 for a $2 win bet. Motion Emotion was second, Another Broad was third and Serengeti Empress dropped to fourth.

One more race is likely for Midnight Bisou before a decision is made whether to run in the BC Distaff or take on the boys in the BC Classic.

Midnight Bisou, who won her first seven races last year (three Grade 1’s) before the loss in the Distaff, now has a career record of 13 wins, five seconds and three thirds in 21 career starts. Not to mention earnings of $7,371,520 for owners Bloom Racing Stable, Madaket Stables and Allen Racing.

“She’s just an amazing mare,” said Smith. “I actually had the lead a little before I wanted to. We were planning on laying a little bit closer but the way Serengeti Empress was winging it on the front end we were a little further back. She’s just incredibly special.” 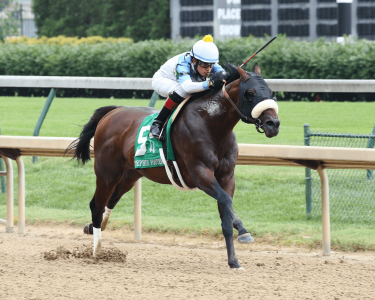 With a field that included touted stakes winners By My Standards and Owendale, Tom’s d’Etat was head shoulders the best of the bunch in the field off eight, topping By My Standards by 4 ¼ lengths.

The 6-5 favorite returned $4.60 to win. By My Standards never seriously challenged the winner, who was ridden by Miguel Mena (replacing Joel Rosario, who had a commitment to ride Uni in the Just a Game at Belmont Park).

“I knew he was a lot of fun to ride him in the morning but didn’t realize how much fun he was in the afternoon,” said Mena. “I owe everything to (trainer) Al (Stall, Jr.) for giving me the opportunity to ride such an impressive horse. He was going along so easy and I just asked him for his attention a little bit at the top of the lane and I didn’t even have to really step on the gas.” 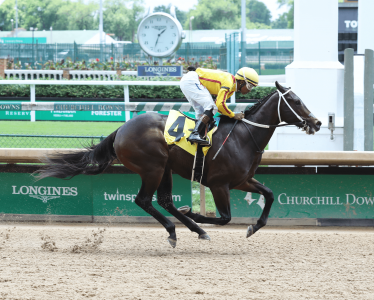 Saturday’s handle for the 11-race race card totaled $13,801,111 — fifth-largest betting total at Churchill on days that did not include the Kentucky Derby, Kentucky Oaks or Breeders’ Cup.

Spectators were not at the track in keeping with the safety protocols due to the coronavirus pandemic, but Churchill officials announced the other day they will allow spectators to attend the Oaks and Derby on a limited basis.

Storm Court, the 2-1 favorite, was never a serious challenger and finished third in the field of 13. South Bend was second, three-quarters of a length behind the winner, who is trained by Tom Amoss (who also trains of Serengeti Empress).

Stop the presses: Newspaperofrecord is back

Brown won the previous three editions of the one-mile turf race with Antonoe (2017), A Raving Beauty (2018) and Rushing Fall (2019). Irad Ortiz was aboard for one of his five victories on the day.

“She’s doing good and has come back really good,” Ortiz said. “Going seven-eighths to a mile is good for her; she can go further, too, and I would not be afraid to go a mile and a sixteenth. I just followed Chad’s instructions.”

Uni, last year’s champion turf female, was making her 6-year-old debut eight months after becoming the sixth female to win the BC Mile (G1) at Santa Anita. She was unable to produce her trademark finishing kick in her return. Beau Recall was second.

Newspaperofrecord ($4.10), sent off as the slight even-money second choice behind Uni, came into the race off a gate-to-wire win the Intercontinental (G3) on June 6. The 4-year-old was a disappointing 0-for-3 last year after posting impressive wins in 2018, including the BC Juvenile Fillies Turf (G1).

The 4-year-old Mean Mary, a daughter of Scat Daddy, is now 3-for-3 this year – all in graded stakes.

Firenze Fire is the man in True North

Five-year-old Firenze Fire finished fourth in his previous start, the Carter (G1) at Belmont on June 6 in his first start for Breen. With the win Saturday, he improved to 12-3-2 in 27 career starts and put him over the $2 million mark in earnings.

“For sure, he needed that last race,’’ said Breen of the Carter. “I think the track had something to do with it last time out. He ran fast. He’s run fast races before. Hopefully, we can move onward to Saratoga and find a nice spot for him there. The goal is to get him to the Breeders’ Cup.”

furlong test for fillies and mares 3-years-old and up.

Ridden by Jose Lezcano, Todd Beattie-trained Victim of Love ran just off the pace set by Jakarta, then took the lead while drifting out a bit in the stretch but moved back inside and proved to be the best of the six-horse field. Second choice Royal Charlotte was fifth.

It’s all about O’Brien in the Irish Derby

Santiago came storming into the lead in the final straight and held on to win the famed $840,000 Irish Derby at the rain-soaked Curragh, leading a 1-2-3-4 sweep for trainer Aidan O’Brien.

With no spectators at the track due to the coronavirus pandemic, Ireland’s top classic produced a thrilling finish as the 2-1 favorite in the 14-horse field had just enough left to win by a head over stablemate Tiger Moth. Dawn Patrol was third and long shot Order of Australia fourth.

It was O’Brien’s 14th victory in a race for 3-year-olds, 11 of them coming in the last 15 years. Seamus Heffernan was aboard Santiago, who came into the race off an eight-day-turnaround after winning at Royal Ascot.

“(Santiago) is a lovely hardy horse and it was a big call by the lads (Coolmore Stud owners) to run him so close after winning at Royal Ascot,” O’Brien told the Irish Times.

The revised racing schedule made it tougher on some of the horses to be ready for such a tough race.

“Some of them, they were maidens still. They were getting pitched in at the deep end. It was tough on them,’’ added O’Brien. “There is only one Irish Derby. We thought it would be wrong not to let them take their chance and we’ll all find out together.’’

In other racing news:

The  New York Racing Association and the state gaming commission placed Barn 37 at Belmont Park under a precautionary quarantine after a suspected case of Equine Herpesvirus-1 (EHV-1) developed in that barn.

Freudnme, a 4-year-old colt trained by Chris Englehart, exhibited fever and neurological symptoms on Saturday morning and has started treatment under the care of a private veterinarian.

Freudnme last raced at Finger Lakes in the Ontario County Stakes on June 24, 2019, where he finished second.

The length of the quarantine will be determined following the return of test results. The quarantine affects all 37 horses in the barn.