The Oaks, the filly version of the Kentucky Derby, drew a field of nine, but this one sure looks like a showdown between the talented favorites – Gamine and Swiss Skydiver.

Here’s a closer look to see if perhaps an upset is in the making: 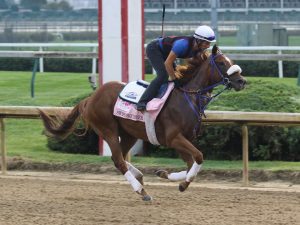 Is enjoying a tremendous 3-year-old campaign and comes into the race off of four straight graded stakes wins over fillies – the Gulfstream Oaks (G2), Fantasy (G3), Santa Anita Oaks (G2) and the Alabama (G1). The lone blemish on her recent record came against males in the Blue Grass (G2), but even that was certainly no embarrassment when second behind Art Collector. Loaded with speed for trainer Ken McPeek, but doesn’t need the lead to win and won’t be distance-challenged at this distance. She’s ready for what figures to be a duel with morning-line favorite Gamine. At 1 1/8 miles, it appears Swiss Skydiver holds the advantage.

Was about even with Swiss Skydiver back at Fair Grounds this winter in the Rachel Alexandra (G3), but this filly has not experienced the same career trajectory for trainer Dallas Stewart. Finished a promising second in the Fair Grounds Oaks (G2), but since has had a pair of layoffs and losses against far inferior competition. Stewart has a knack of running second at giant 50-1-like odds in high-profile races like this.

Is the X-factor because she seemed to have had the high-class ability earlier but she’s not been seen the past 5 ½ months — since winning the Santa Ysabel (G3) at Santa Anita in March.  Nearly won the BC Juvenile Fillies (G1) when just a neck short, then finished second in the Starlet (G1) at Los Alamitos. She has a lot to prove in this spot off such a long layoff for trainer Simon Callaghan. Nevertheless, if you’re looking for a 15-1 shot with a serious chance in the exotics, this is your horse.

Is the unheralded star in the field and could upend what many people expect to be a two-horse race. She may have more trouble with Swiss Skydiver based on her four-length loss to her in the Santa Anita Oaks (G2). In a race at Oaklawn in May, Speech came within a neck of Gamine at 1 1/16 miles, and was later awarded first-place money when Gamine was DQ’d for having a performance-enhancing medication in her system. Plus, last time out Speech was better than ever in winning the Ashland (G1) at Keeneland by three lengths. The race ended her bridesmaid reputation following four previous runner-up finishes. Seems to be a logical third horse in the trifectas, or a possible alternative to the top two horses in the exactas if you’re looking for a better price.

Is another talented 3-year-old trained by Bob Baffert. Overpowering winner of the Acorn (G1) at a one-turn mile at Belmont by 18 3 /4 lengths, she came back and won the 7-furlong Test (G1) at Saratoga by seven lengths. The big question for her is distance. Can she do what she does as effectively at 1 1/8 miles around two turns against a field loaded with proven quality route horses? It’s a tough act to beat horses like Gamine, but the time to do it is when they’re entered in vulnerable spots, and the Oaks is a vulnerable spot. The one time she stretched to two-turns so far was at Oaklawn, and she was tiring late and nearly got caught by Speech.

Is the only horse in the field with a win over Swiss Skydiver, so consider that before immediately tossing her at 50-1 odds. That career-best victory came on a sloppy track at a mile at Churchill last November, but unfortunately, she has failed to move forward in three starts since. She was seventh in the Davona Dale (G2), third in the Dogwood (G3), and third behind Shedaresthedevil in the Indiana Oaks (G3). Best chance of making a dent would be if the track comes up wet Friday.

Beat up on high-priced allowance optional claimers at Churchill two races ago and then validated that win with a repeat last time in the Indiana Oaks (G3). Also looked good this spring at Oaklawn when she won the Honeybee (G3), yet when she faced the likes of Swiss Skydiver the next time out in the Fantasy (G3), she was beaten 13 lengths. Certainly putting together a solid campaign, but the water gets a lot deeper in this spot for trainer Brad Cox, and she has yet to run a speed figure near what it will take to upset the favorites .

Probably has the best chance of the 20-1 to 50-1 long shots based on the big step forward she took last time out with added blinkers to win the Monmouth Oaks by four lengths. Seems to have some upside still at this point in her career for trainer Anthony Margotta and has a dangerous running style as a horse who will be up close but doesn’t want or need the lead in order to win. A minor placing in the exotics doesn’t seem out of the realm of possibility.

Is the last of the long-odds stabs rounding out the field. Got good at Gulfstream back in December and January for trainer Matthew Williams, but is winless in six outings since, with her claim to fame a second-place finish in the Delaware Oaks (G3). She lost to Swiss Skydiver by 11 lengths, and was seven lengths behind Hopeful Growth in the Monmouth Oaks. Needs major improvement to make a dent.

Of favorites Gamine and Swiss Skydiver, Gamine has a distance question to answer, while Swiss Skydiver seems to have few weaknesses and looks to be the most likely winner.

In the multi-race wagers, single  Swiss Skydiver, because the pick three, pick four, and pick five sequences figure to be dominated by chalk with #7 Four Graces (7-5) looking very tough in the Eight Belles, #3 Sharing (6-5) looking good in the Edgewood, #6 By My Standards (7-5) looking like the horse to beat in the Alysheba, and #8 Monomoy Girl (4-5) looming large in the La Troienne.