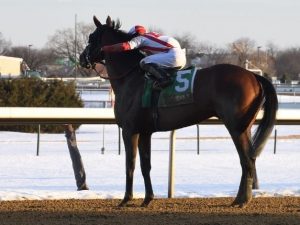 A year ago, as the COVID-19 pandemic bared down on the world and tossed everyone, including the nation’s horse racing calendar, into chaos, several of the most important Derby preps – and the Triple Crown itself – were either postponed or canceled.

The Wood Memorial was one of the races to not survive in 2020, but it’s back this year with a big purse, a strong field and 100-40-20-10 Derby qualifying points to the top-four finishers, which means the winner and quite possibly the runner-up, will make the gate for the Derby in four weeks.

The Wood was first run in 1925 and named after Eugene D. Wood, who was a New York politician and horse racing enthusiast who had recently passed away. Wood served as president of Jamaica Racecourse for more than two decades.

Also, the great champion and Triple Crown winner Secretariat famously finished third in the Wood in 1973, the loss blamed on an abscess in his upper lip, which was believed to be aggravated by his bit.

Overall, 11 Wood Memorial winners went on to win under the Twin Spires on the first Saturday in May, and even though no Wood winner since Fusaichi Pegasus has completed a Wood-Derby double, each year an exciting bunch races in New York’s marquee event to secure enough points to make the Derby.

From 1925 to 1939, the Wood Memorial was contested at 1 mile and 7 yards, 1 1⁄16 miles from 1940 to 1951 and it has been at 1 1/8 miles since. The late Hall of Famers Sunny Jim Fitzsimmons and Eddie Arcaro still lead the trainer/jockey standings for this race despite the fact neither has been represented by a winner since the 1950s. They even teamed up for the win in 1957 with Bold Ruler. Fitzsimmons saddled seven winners while Arcaro was aboard nine.

It looks like spring has finally sprung and the cold and wet weather from Friday will give way to mostly sunny skies with temperatures reaching into the mid-50s.

The Wood Memorial is the day’s 10th race feature and is expected to leave the gate at approximately 5:58 p.m. ET.

The Wood Memorial field, in post-position order, with jockey, trainer and odds: