4 Keys to Look for in Betting the Kentucky Derby

2020 threw us a curveball. We couldn’t celebrate the anticipation of the first Saturday in May like we do every other year. Yet this doesn’t change my approach to handicapping the Kentucky Derby on the first Saturday of September.

The Derby often poses a great opportunity for value with untested, developing horses trying something outside of their comfort zone. While there will be a handful of horses that have run a race at this distance before or against graded stakes company, it will remain a test for most of the field. 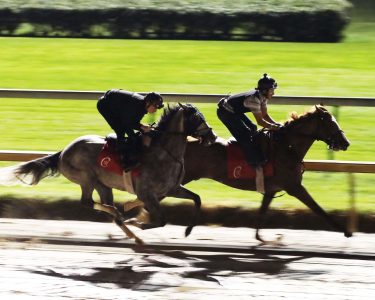 1 Pedigree – Who can get the distance?

At 10 furlongs the Kentucky Derby is the longest distance that many of these horses will ever race in their careers. Yet, 2020 does offer a unique situation. A handful of these entrants have already seen 10 furlongs in the Travers (G1) at Saratoga at the beginning of August. It is not a great surprise that Tiz The Law dominated at this distance in the Travers with Tapit as his grandsire and Tiznow as his dam sire. Look for horses that have shown ability at 9 furlongs or longer and are bred to go a little further.

Even if you don’t know much about pedigree or have resources to help you, be sure to look at the BRIS or DRF pedigree ratings since they take into account the dam’s side of the pedigree, not only the sire.

2 The need for speed

Like Maverick says to Goose in Top Gun, “I feel the need … the need for speed.”

The early pace of the Derby is typically faster into the half mile than other two-turn routes at Churchill Downs. It can be a free-for-all on the front end. This leads me to look for two types of early pace horses.

The first is the Maverick, or need the speed, kind of horse. Each one of these horses needs to be vetted as either a strong early speed horse or a one dimensional front runner. Has this horse ever faced any adversity on the front end or has he always cruised through the half mile call with a comfortable two length or longer lead? What are the types of fractions has he shown success against in the past? If he is most comfortable in races with 48 seconds to the half mile, he likely won’t be much of a factor here since the average half mile call has been 46.20 seconds over the last 20 years.

The point is that the pace will be fast and that unless the horse has a decent post position to get to the lead and a sizable pace advantage, a wire to wire effort is not likely. The last horse to win the Kentucky Derby wire to wire was War Emblem in 2002 in a race that had a pedestrian pace with a half mile call of 47 seconds.

The second is the more versatile running style horse. This is the horse that may have shown some early foot in the beginning of his career, but after a race with some pressure or a wicked fast half mile call has shown the ability to come from off the pace or duel. These horses are proven to be able to handle pressure at a moderate or fast pace. You’ll need to discount the horse that won the duel with the half mile going in 48 seconds, but if they can be a factor against a hotter pace than they were comfortable setting, you will need to give them a second look.

3 A History Of Excuses

When analyzing a horse’s running lines, be sure to go farther right than the finish position and lengths behind. Look at the comments to see if he encountered any trouble and how the horse either overcame it or finished admirably despite it. Look to see if a front runner type horse had some trouble at the gate and was forced to try to come off the pace. Look for horses that had troubles with traffic and were forced to go wide and still made up considerable ground late.

This key can play into No. 2. When a horse encounters trouble, he either has to overcome a deficit early on or is forced to race from off the pace instead of setting the pace. Forcing a horse to run a different style of race can clue you in to his true ability.

Races with troubled trips often mask the horse’s true ability and form from the betting public. It is also helpful to look to see if there were other factors that may have helped or hurt the horse in this situation such as a barn change, new jockey, new equipment, or the condition of the racing surface?

Don’t discount a horse coming off of a polytrack or the turf if they didn’t seem to like it. Coupling the change in surface or distance with other positive changes could set this horse up to run the biggest race of their career in this spot.

These horses are 3-years-old and still maturing, even if they are more mature at the running of this Derby. So there is still considerable room for improvement over their mid-summer efforts. Unlike older horses, 3-year-olds are more likely to run a career best with each subsequent race. Older horses regress to the mean, running better or worse than their average over time.

So whether you are a casual horseplayer or you make your living playing the races, the Kentucky Derby is one of the most anticipated races all year. By looking for some specific keys you can find yourself a nice-priced winner.