While horse racing chugs along in the United States with only a few tracks continuing to race through the coronavirus pandemic, racing at the Japan Racing Association (JRA) continues to be conducted full speed ahead without spectators. 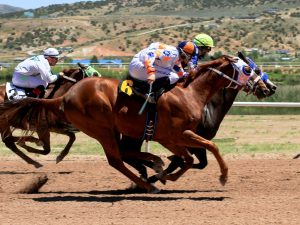 Image by Calvin Tatum from Pixabay

The race is a prep for the $1 million Victoria Mile (G1) to be run at Tokyo on May 17. The 2020 Fukushima Himba has drawn an evenly-matched field and looks like a wide-open, high-quality affair.

The Satsuki Sho is the first leg of the Japan Triple Crown. It was won by the favored undefeated 3-year-old Contrail over a field of 18 runners.

The second Japanese Triple Crown race, the Tokyo Yushun (Japanese Derby), will be run at Tokyo Racecourse on May 31. The third leg, the Kikuka Sho (Japanese St. Leger) won’t be run until October 25 at Kyoto.

Back to this weekend. The Fukushima Himba will run as race 11 on the 12-race Fukushima April 25 card. It will host a full field topped by several well-regarded challengers.

Among the favorites and horses to beat in the race will be Fairy Polka, who exits a win over some of these top challengers last time out in the Nakayama Himba Stakes (G3), where she took advantage of soft turf.

The Nakayama Himba third-place finisher and beaten favorite Espoir, who owns four wins and eight in-the-money finishes in nine career outings, will have a chance for revenge and could once again go off as the favorite.

Lune Rouge ran second at giant odds in the Nakayama Himba and will try to prove that race was not a fluke. Also in the field with a major shot is last year’s Fukushima Himba winner, Denko Ange, who more recently won the Aichi Hai Stakes (G3) at Kokura Racecourse on Jan. 18 before finishing fourth behind the aforementioned Fairy Polka, Lune Rouge, and Espoir in the Nakayama Himba last out.

Many of the field are stepping up into graded stakes company after wins in recent allowances races, including Shonan Babiana, Fast Life, Candy Storm, Blanc Noir, and Astra Cent Ans, plus Naruhaya, who seems never to run a bad race, and particularly March Lorraine, who appears to be an up-and-comer who just recently broke her maiden but now owns wins in three of her last four races.

Generally speaking, however, it is difficult for these allowance runners to successfully make the jump up to the Graded stakes level. If any of these can do it in the Fukushima Himba, it would likely be March Lorraine as the one to fear.

The JRA is made up of Japan’s 10 racecourses, including the “big four” of Tokyo, Nakayama, Kyoto, and Hanshin, which host nearly all of Japan’s Grade 1 races. Tracks host both dirt and turf races, mainly on right-handed courses with the exceptions of Tokyo, Niigata, and Chukyo, which run in the North American counterclockwise direction.

A total of 288 race dates are conducted each year, and purses and handle are generally high when compared to North American races. The JRA has announced that horse racing will continue without spectators through at least May 31 at four tracks, Fukushima, Tokyo, Kyoto, and Niigata. The other tracks around the country are closed indefinitely.

The Fukushima Himba Stakes (G3) is perhaps the biggest race of the year run at Fukushima Racecourse, which hosts just four graded stakes events each year. Fukushima is located in the northern half of the country. It conducts the Fukushima Himba on its one-mile circumference right-handed main turf course.

If you enjoyed this piece on Japan Horse Betting, check out other articles at our horse racing news section!