Horse Racing Injured: When Taraz made her first appearance on the track at Oaklawn Park a few mornings before winning the Martha Washington Stakes on Feb. 1, the 3-year-old filly caught the attention of just about everybody on the grounds.

So muscular and imposing, Taraz simply stretched her legs over a 1 ½-mile gallop; and all the hype surrounding her 2-for-2 record, having won by a 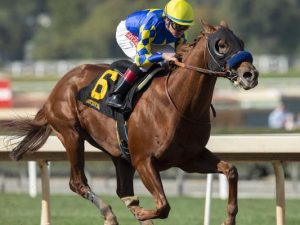 combined 18 ¾ lengths, seemed justified. And then she easily won the Martha Washington by 3 ¾ lengths.

“She’s special,” trainer Brad Cox told usracing.com/news before what would be the final race of her career.

On Monday, Triple Crown-nominated Taraz was euthanized after suffering a severe fracture to her left front pastern during a workout at Oaklawn, according to a statement issued by breeder/owner Juddmonte Farms.

Taraz, preparing for the Honeybee Stakes (G3) on March 7 at the track, was so dominant against fillies that she was nominated for the Triple Crown races; and Cox had said running in the Kentucky Derby (G1) was a possibility.

After the injury, Taraz was examined back at Cox’ barn, and X-rays were reviewed by Dr. Bob Hunt of Hagyard Equine Hospital.

“Given the extreme nature of the damage to the bone and compromise to the blood supply; it was agreed that repair was impractical,” the statement said. “Having consulted between trainer Brad Cox, veterinarians and Juddmonte management it was deemed best to euthanize the filly.”

Taraz won her debut by 7 ½ lengths at Churchill Downs on Nov. 14; then she cruised by 11 ¼ lengths in the Letellier Memorial at the Fair Grounds on Dec. 21. Her two-turn debut was impressive as well in the Martha Washington.

Cox commented several times on how massive this filly was: “I don’t have a scale or a measuring stick,” he said. “I’m not sure, but she’s big – a big girl.”

Taraz was a daughter of Into Mischief – 2019’s leading general sire and sire of Covfefe — and Silk Route, by the recently deceased Empire Maker.

If you have key info on horse racing injured runners, register for an account here at UsRacing.com, grab an amazing welcoming bonus, and get your action!