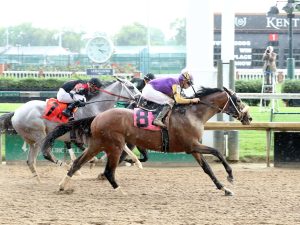 Whether you are a casual horseplayer or you make your living playing the races, we’ve all been there. At some point you were a beginner horseplayer too.

Some of us were more fortunate than others to have someone introduce us the sport and to help us understand the wagering and handicapping sides of the game. I had my Uncle Dutch who gave me a great foundation to become the handicapper I am today during that misspent summer on the apron of the Monmouth Park grandstand.

Many people aren’t so lucky. Going to the track without understanding how the betting works and having no clue what anything means can be an overwhelming experience. After all, you are not playing with Monopoly money, you are playing with your hard earned money.

Yet, there is no need to feel overwhelmed and terrified of going to the track. If you take the time to follow a couple simple tips, you’ll feel more confident going in and need a wheelbarrow to haul your winnings back out.

A decade ago I made friends with the dad of one of my kid’s friends. Over a couple of beers at his son’s birthday barbecue the entire group of dad’s started chatting about hobbies and interests. As I was explaining how I enjoy handicapping and gambling his ears perked up. I knew he was hooked. It turns out that his dad had been a bookie in Brooklyn and made sure that his kids never got into gambling. As the evening wound down and cake was served, he pulled me aside and said “take me with you.”

At first I thought he was exhausted and wanted to get away from the huge mess the dozen or so kids had left after being pumped up on sugar and soda. The perplexed look on my face caused him to add, “… to the track, I want to know more.”

Relieved that I wouldn’t need to babysit a grown man that was half in the bag, I agreed. A couple weeks later First-Time Frank and I set off down to Monmouth Park for his first trip to the track. On the ride down he had a million questions. Since I was driving I handed him my past performances and all my notes. His eyes widened as he said “I thought you just went down and picked a horse?”

As we sat in the usual Route 36 traffic I told First-Time Frank that is was a bit more complicated than that. He responded with a “teach me o’ wise one,” and offered to buy the beer that day. That was an easy sell.

Through the course of the day I showed him what I looked at and what I looked for in both the past performances and the paddock. I could tell he was overwhelmed. I reminded him to write things down and that over time it would come much more naturally. At the end of our day his bankroll was hurting. So I gave him an assignment that consisted of five items.

Author Malcolm Gladwell coined the 10,000-hour rule. He claimed that doing anything for 10,000 hours would make you an expert. While this has been defended, debated, and debunked by some, it isn’t totally without merit. If you don’t take the time to handicap the races, how will you ever learn more and improve upon what you are doing?

I told First-Time Frank that I would send him a track a day for the next couple of weeks. I wanted him to handicap each card. See what worked and what didn’t work. Write down how he did.

Eventually when you handicap enough races, you start to see the same scenarios unfold. It could be lone early speed or a one dimensional frontrunner. It could be a field of first time starters or maidens that are all trying something new. The only way to get more comfortable with your handicapping process and the characteristics of each type of scenario is to handicap a number of them and learn from each race.

Beg, borrow, or steal books on handicapping from friends, family, or the library. Play with the ideas and concepts of Ainslie, Beyer, Quinn, Quirin, Cramer, and Pizzolla, to name a few. I guarantee that you will find at least one great takeaway from every handicapping book or article you read. Read the obscure authors as well like Pandolfo, Vaccaro, Klein, and Stich. Some of my best ideas have come from books by lesser name authors.

Collect these thoughts. Write them down. Add them to your handicapping arsenal.

I told First-Time Frank to join a couple of online message boards or to post his picks on social media in horseracing groups. Start a conversation or thread on a particular race or card. When you start adding analysis to your picks others will chime in either for or against your selections. This will force you to see different perspective and traits or qualities you may have missed in your own handicapping.

Take it one step further. Record yourself giving analysis, pretending to be like Track Handicapper Travis between races. Try to use the same words as they do and talk about class, pace, and connections. Put it on YouTube for the world, or your four closest friends, to see.

You’ll be surprised at what you can learn when you are “talking the talk.”

Know that you will fail a lot before you find success. Make mistakes and learn from them. Get angry at failure and work your butt off to find what your best way to win is.

This is the most important assignment I gave First-Time Frank. When you have a passion for the races you will find it more interesting, when you think of it like a chore you won’t enjoy it.

Embrace the day. The pomp and circumstance of the paddock, the characters you’ll meet like Rail Guy, the specialty food and drinks – take in the entire experience and appreciate every minute that you get to be at the track and in the presence of so many amazing, majestic animals.

When First-Time Frank and I returned to the track towards the end of the summer, he was a different man. He had built a good handicapping foundation. He understood the conditions of the races, how to wager, and most of all he had a plan when he arrived at the track. First-Time Frank was confident in his selections and we enjoyed talking about our views of the races on that lazy August Friday afternoon card at Monmouth Park. This time, I offered to buy the beer since First-Time Frank was busy checking out the horses in the paddock and Rail Guy had somehow caught his ear.

I am sure you have heard the expression that “Rome wasn’t built in a day,” and the same holds true for handicappers. By exposing yourself to the game and other handicappers you can overcome the beginner’s fears and be successful at the track.