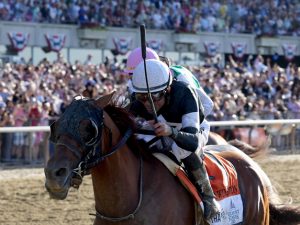 Change can be stressful and disorienting, so we dislike it. More than most sports, horse racing loves retracing its steps, especially along the revered Triple Crown trail. Yet in this year of the pandemic, it had to find another way.

For the first time, the Belmont Stakes will come before the Kentucky Derby — 11 weeks before. There was no way to fit a 1½-mile race into the scrambled 3-year-old calendar, so it will be run at 1 1/8 miles on June 20. Good move.

“Because of the way the race is now positioned, that’s the right distance,” New York Racing Association president and CEO David O’Rourke said. “We respect the tradition of it, but it’s not the third leg in a five-week series anymore. It’s a 3-year-old race in June before any of the others, so the distance to us makes sense.

“This will be the year everything goes out the window. If there is ever a time to do something different, it’s this year.”

You can say O’Rourke is being self-serving, but I give him a loud “Amen.” So does NBC racing analyst Randy Moss.

“I think NYRA did an outstanding job of making lemonade by making the best of the situation they were dealt,” Moss said. Trainer Todd Pletcher, a three-time Belmont winner, and prominent owner Mike Repole agreed, as did racing analyst Paul Lo Duca.

If angry traditionalists want to devalue the 2020 Triple Crown, that’s their problem. After two profoundly disturbing months, it’s time to get into what’s good. America’s most important tracks — Churchill Downs, Santa Anita and Belmont Park – are back, and the new and different Belmont Stakes is shaping up as an excellent race.

According to NYRA, almost all the marquee 3-year-olds are pointing for it. New York-bred star Tiz the Law are probable, with unbeaten Maxfield a possibility. Other likely runners include Risen Star (Division 2) winner Modernist; Withers winner Max Player; Pletcher’s Farmington Road and Gouverneur Morris; Sole Volante and Basin. Speedy Ny Traffic, second in the Louisiana Derby and the Matt Winn, also could be in the mix.

Moss recently drew fire on Twitter for his Belmont opinion. A week before the May 19 announcement of the new date and distance, he referenced an ongoing Paulick Report poll in which 72 percent wanted to keep it at 1½ miles even as the Triple Crown opener.

Moss’ take: “It just shows how many racing fans are so obsessed with tradition that they throw common sense out the window.

Jim DeZolt fired back: “Obsessed with tradition? Why run it at all if it’s going to be 9 furlongs? … It would be a Belmont Stakes in name only. Take a year off. I’ll wait for a real TC season.”

Ed DeRosa, director of marketing for Brisnet and a Churchill handicapper, also disagreed with Moss. DeRosa’s tweet: “Just put the race on pause for a year if 1½ miles isn’t an option. 1 1/8 miles isn’t ‘The Test of the Champion.’’

No, and seeing a one-turn Triple Crown race will be strange, but the Belmont field will be better than the one that would have assembled for the May 2 Derby. Giving 3-year-olds seven extra weeks to mature is a major plus. They’ll be stronger and more accomplished than they would have been on the first Saturday in May. It was painful to see Churchill deserted that afternoon, but there was no way around it.

The debate about restructuring the Triple Crown has been going on for decades. Is it asking too much of a young horse, the equivalent of a human teenager, to run 1¼, 1 3/16 and 1½ miles at three different tracks over five weeks? Few would say no, and even fewer would deny that the Belmont distance is an anachronism in an era when speed, not stamina, is prized.

Hall of Fame trainer D. Wayne Lukas, winner of 14 Triple Crown races, proposed a new schedule in 2009. Lukas suggested keeping the Derby where it is but switching the Preakness to Memorial Day weekend and pushing back the Belmont to around the Fourth of July. It sounded radical 11 years ago but would be only a tweak compared to what’s happening now.

Relax, traditionalists, because we’ll be going back to the old format next year. COVID-19 forced racing to try something new, so wait and see how this 15-week Triple Crown shakes out. Don’t act like it’s heresy. Horse racing is entertainment, not religion.