Once-beaten Authentic was made the 4-5 morning-line favorite in a field of seven entered for the $1 million TVG.com Haskell Stakes (G1) at Monmouth Park on Saturday.

Authentic, who drew the No. 2 post and will be ridden by Hall of Famer Mike Smith, is trained by eight-time Haskell winning trainer, Hall of Famer Bob Baffert. 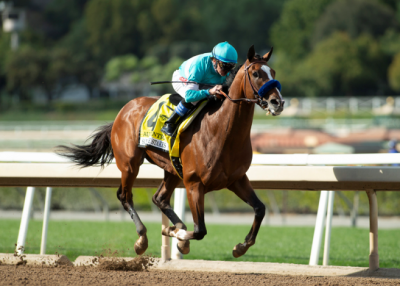 Winner of his first three starts and runner-up to Honor A.P. in the Santa Anita Derby (G1) on June 6, Authentic will be racing outside California for the first time.

Belmont Stakes (G1) runner-up Dr Post, trained by Todd Pletcher, was made the 5-2 second during Wednesday’s post-position draw. Dr Post, with Joe Bravo getting the call, drew the No. 1 post for the 1 1/8-mile Haskell for 3-year-olds.

Ny Traffic, trained by Saffie Joseph, Jr., is the 7-2 third choice coming off second-place finishes in the Louisiana Derby (G2) in March and the Matt Winn Stakes (G3) in May.

For the first time, the Haskell is a Kentucky Derby (G1) points-qualifier offering 100-40-20-10 points to the first four finishers. The Derby has been rescheduled to Sept. 5 due to the coronavirus pandemic.

In addition, the Haskell is a “Win and You’re In’’ race for the Breeders’ Cup Classic (G1) at Keeneland on Nov. 7.