Handicapping the Spa: 5 Tips for a Summer of Winning Wagers

If you are a serious horseplayer and you are not already looking forward to the Saratoga meet, it might be time to check your pulse because Saratoga is the summer place to be for handicappers and horse racing aficionados.

The looked-forward-to racing season will last throughout the heart of the rest of the summer, but with some notable scheduling changes in store. 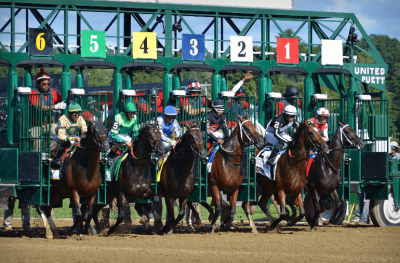 Much to the disappointment of so many of us, the 2020 Spa meet will be run in front of an empty grandstand with no fans in attendance due to safety protocols involving COVID-19. Nevertheless, the nation’s greatest race meet will go on.

Opening day is Thursday (July 16), and the meet will run five days a week, Wednesdays through Sundays, until Labor Day (Sept. 7).

The Saratoga meet features 71 stakes races, including 39 graded stakes and 18 Grade 1’s. The big day features the Travers, which is Aug. 8 – a few weeks earlier than usual and becomes a Kentucky Derby prep race.

However, there’s a meet to be run five days a week so let’s look at some categories that handicappers can focus on to help narrow the choices and find the kind of good-priced winners you see popping up each day.

Saratoga’s main track is speed favoring at all distances, no doubt about it. The speed bias is especially prevalent in races at 6 furlongs and shorter, particularly with 2-year-olds. Early speed horses on the pace or within a length of the lead at the first call win nearly 50 percent of all juvenile dirt sprints shorter than 6 furlongs. Pressers and the occasional stalker tend to win the rest. Speedsters and pressers also do very well at all levels for all ages at the commonly-run dirt distance of 6 furlongs.

2. A look at route racing flip-flops

With the move to Saratoga, a focus is on route racing flip-flops from benefiting one-turn routers at Belmont to favoring route horses that do their best running around two turns – and at 1 1/8 miles – as opposed to a mile or 1 1/16 miles. Look down the past performances and bet horses whose best route races came on more traditional two-turn layouts such as Aqueduct, Gulfstream, Churchill, Keeneland, the mid-Atlantic region, or in past races at Saratoga – but not at Belmont.  This is particularly true if a horse has run past races around two turns at 1 1/8 miles (Saratoga cards no dirt races at 1 mile and 1 1/16 miles). Give these two-turn main track distance horses the edge against over-bet horses that do their best running in Belmont’s unique one-turn route races and/or at one mile and 1 1/16 miles. People overlook this huge difference, but it is the handicappers who don’t overlook it who win bets at Saratoga.

3. Upgrade outside posts in turf sprints

Downgrade the three inside posts in turf sprints, particularly the rail, while upgrading horses drawing far outside posts. This is mainly important in large turf sprint fields with more than eight runners. Combine this with good handicapping and your turf sprint ROI at the meet will soar. Even with no handicapping at all, you can blindly box the outside three or four horses in turf sprints with more than nine runners and still do pretty darn good most of the time. Those outside horses can be serious overlays, too.

4. Look inside for turf route races

Outside posts are negative factors on the Saratoga turf courses in routes to varying degrees. Posts 8 and outward are slight disadvantages on both turf courses at most route distances, while far outside posts 10-12 are usually poor bets. The inside three posts can offer a good advantage to horses running on the inner turf course at the distances of 1 mile and 1 1/16 miles.

5. Off-the-pace a way to go on the outer turf course

Of course, you can’t talk about Saratoga handicapping without mentioning top trainer Chad Brown, who annually battled it out with Todd Pletcher for leading trainer until the last couple seasons when he asserted his dominance. In 2020, Brown had 41 victories to Pletcher’s 21. In 2018, Brown won 46 races, which set the Saratoga training record.

All of the aforementioned trainers should be respected in all spots, but all have their specialties. Brown wins turf routes and stakes races at an alarming rate. Pletcher reels off 2-year-old maiden wins and stakes wins. Asmussen wins with 2-yer-olds and maidens and a variety of sprinters mainly.

Play these trends in the various types of races at Saratoga, and you will have a solid starting framework for what it takes to help you win at the meet.