With the Kentucky Derby (G1) prep races in their final few weeks, usracing.com is publishing profiles of the contenders for the $750,000 Florida Derby (G1) on Saturday [March 27], a Derby points-qualifier offering 100-40-20-10 points to the first four finishers. Post-position and odds will be updated following Wednesday’s draw.

Spielberg is named for one of the most influential filmmakers of all-time, Steven Spielberg. Whether this colt, a $1 million yearling purchase, will make a name for himself in the quest for the Triple Crown remains to be seen but the stage is set for him to go from supporting player to starring role on Saturday. 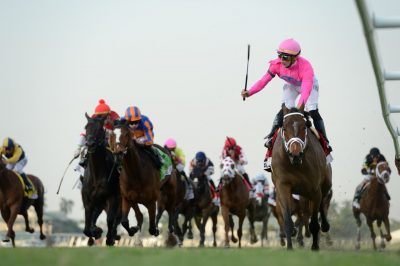 The colt, who had his breakout performance in the sixth and final race of his juvenile season when he won the Los Alamitos Futurity (G2), is still looking for his first 2021 score after two tries at the Grade 3 level.

That made Spielberg one of the lesser lights in Hall of Fame trainer Bob Baffert’s star-studded cast of Triple Crown hopefuls, but now that leading man and early Kentucky Derby (G1) favorite Life Is Good is sidelined with injury until fall, a Florida Derby (G1) win would elevate Spielberg in a barn stacked with talent.

“I have all these horses and I’m going to separate them out,” Baffert told the Gulfstream Park media team. “Spielberg ran well at Arkansas. Broke horribly, came on and ran second. He wasn’t going to beat the winner. We’ll take him down there [to Florida]. See how he ships down there and how he stacks up. The California horses, I think are pretty strong. Maybe I can get lucky if I can win or run second. That would be nice. But it’s a tough task. We’ll give it a try.”

A victory would also vault him up the Derby leaderboard and guarantee him a starting gate spot as there are qualifying points (100-40-20-10) up for grabs and Spielberg currently sits in 16th place with 17 points. A runner-up finish would put him into a strong position as well.

“We’ll see how he does and how his numbers fit. It’s a good spot to be in these 100-point races and at least have the option. If he runs well and runs a good number, I’m sure we’ll go ahead and race him,” said Jack Wolf, the head of co-owner Starlight Racing during a March 23 national media teleconference.

Hall of Famer Javier Castellano, who is staging a strong comeback from leg surgery, has picked up the mount for Saturday.

“I’m very excited. He (Baffert) called me (March 19) and asked if I was able to ride his horse and I said, ‘Of course.’ I’m very grateful to have the opportunity to ride the horse and I’m looking forward to Saturday. All the jockeys have booked for the big races and I’m very lucky and fortunate to be open to ride the horse,” said Castellano. “We’ll see what happens. It’s a wide-open race. In this game, anything can happen. Maybe it’s meant to be, and I’ll be in the right place and get lucky.”

Running style: Versatile. Can contest the pace, rate behind it, or close

Notes: Baffert, who trained Triple Crown winners in 2015 and 2018, liked what he saw when Spielberg breezed 5 furlongs in 59.40 handily, which was the second quickest of 81 horses working that distance at Santa Anita on March 21. “He went well, He’s very workmanlike and he’s steady.” …Part owners Sol Kumin (Madaket Stables), who heads more than a half-dozen racing partnerships, and Starlight Racing were partners in 2020 Kentucky Derby, Breeders’ Cup Classic winner and Horse of the Year Authentic and 2018 Triple Crown winner and Horse of the Year Justify … Partner Robert “Bat” Masterson was the sole owner of two-time champion Turf Mare Tepin but has never had a Kentucky Derby starter … By 2012 Belmont Stakes winner Union Rags and out of a Smart Strike mare, the Kentucky-bred Spielberg is bred to run all day long so the 1 1/8 miles distance of the Florida Derby should not present any problems as he continues to stretch out.