Hall of Famer Bill Mott looks to become the Grade 1 Woodward’s leading trainer on Saturday when he sends out Juddmonte Farms’ multiple graded-stakes winner Tacitus in the 67th edition of the $500,000, 1 ¼-mile race at Saratoga Race Course. 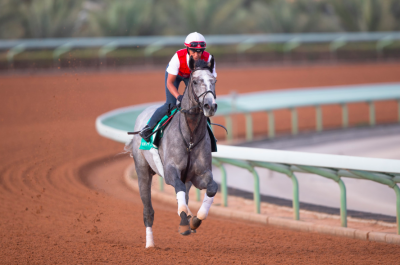 A son of Tapit out of 2014 champion older filly Close Hatches, Tacitus scored the first victory of his 4-year-old campaign on July 4 at Belmont Park when he drew off by a commanding 8 ¾ lengths in the Suburban Handicap (G2). It was his first win since last year’s Wood Memorial (G2) at Aqueduct, subsequently having finished fourth (and placed third) in the Kentucky Derby (G1), second in the Belmont (G1), Jim Dandy (G2) and Travers (G1), and third in the Jockey Club Gold Cup (G1) in 2019.

He began 2020 finishing fifth in the Saudi Cup on Feb. 29 and then fourth in the Oaklawn Handicap (G2) on May 2 before his runaway win in the 1 ¼-mile Suburban

“He’ll be a fresh horse going in,” Mott said, whose four Woodward wins has him tied with Hall of Famers Bobby Frankel and Elliott Burch. “He had done a lot of traveling earlier in the year. The Oaklawn race could have been a mistake, but at least we came back and capitalized on the next race being the Suburban. Right after Oaklawn, we decided we would wait for it.”

Mott said Tacitus has done a lot of growing up from last year.

“His energy level has been good,” Mott said. “Naturally, he’s a more mature horse from last year, which is normal. He feels good early in the morning before he goes out and he gets geared up and anxious to go once he gets going. He’s good to ride and he’s easy enough on himself to where he can take care of himself.”

Jockey Jose Ortiz is aboard with the pair leaving from post 2.

Trainer Todd Pletcher doubles down with Suburban runner-up Moretti (8-1), who went on to take the 1 ¾-mile Birdstone on Aug. 2 at the Spa, and Spinoff (3-1), winner of the Alydar on Aug. 9 at the Spa.

Spinoff, a stakes-placed son of Hard Spun out of Grade 1-winner Zaftig, owns two victories and a third at Saratoga, having finished third in the 2018 Saratoga Special (G2), and taking an optional claimer last year in addition to his win in the Alydar.

“Spinoff seems to like Saratoga a lot,” Pletcher said. “He’s shown us hints along the way that he has potential for that breakthrough performance. He’s 2-for-2 around two turns here at Saratoga so that’s encouraging as well.”

A son of Curlin, Global Campaign has won two of three starts this year, including the Monmouth Cup (G3) on July 18, and also lists a victory in 2019 Peter Pan (G3) on his resume. He will leave from post 4 under Luis Saez.

Rounding out the field are Math Wizard (12-1), most recently fifth in the Charles Town Classic (G2), and William L. Clifton, Jr.’s Prioritize (15-1), a winner on both dirt and turf.

Winner of last year’s Pennsylvania Derby (G1), Math Wizard drew the rail under Joel Rosario, while Prioritize will leave from post 6 with Eric Cancel in the irons.

Dr Post, a son of Quality Road, has hit the board in all five starts, including a victory in the Unbridled at Gulfstream Park this spring. Following the Belmont, he finished third in the Haskell on July 18 at Monmouth Park, and was under Derby consideration until a recent change of plans to stay at the Spa.

“He’s a high-quality colt and trains accordingly,” said Pletcher, who will give a leg up to Irad Ortiz, Jr. from post 6. “I’m very happy with him. He showed his quality in the Belmont when he ran as close to Tiz the Law as anyone else has. He kind of had a less than ideal trip in the Haskell, but hopefully he’s ready to move forward here.”

Happy Saver, a son of Pletcher’s Derby winner Super Saver, started his career 2-for-2 with a 5 ½-length debut score on June 20 and a four-length win at the Jim Dandy distance against allowance company on July 26 at Saratoga.

“He’s ready for the next step,” Pletcher said of Happy Saver, who drew the rail under Jose Lezcano. “He’s certainly run well enough in his allowance races to indicate that he had a stakes spot in his future. Now, we’ll see if he can handle the step up in class.”

Lining up against the Pletcher pair in the Jim Dandy, which will be run as race 9, will be Godolphin’s Mystic Guide (4-1), third in the Peter Pan (G3) on July 16; Jesus’ Team (6-1), second in Monmouth Park’s Pegasus last time out; Easy Goer winner Celtic Striker (20-1); and Liveyourbeastlife and First Line (20-1), both making their stakes debuts.