I always have a handicapping hangover after Oaks-Derby weekend, no matter whether I won, broke even or lost. It’s glorious to watch and wager on top-class horses in race after race. On the flip side, it makes dealing with weekday cards of cheap claimers and one-for-life allowance types even less appealing.

I usually take most of the next week off, but I made an exception Sunday morning, when I bet on the English 1,000 Guineas for 3-year-old fillies. Thanks to a tip from the British site sportinglife.com, I hit a $10 win play on Mother Earth, a 7-1 shot trained by Aidan O’Brien and ridden by Frankie Dettori. (I later learned she went off at 10-1 in England, but you have to take what the racing gods give you.) I bless her name because she put me slightly into the black after two days of dramatic mood swings caused by the pari-mutuel ebb and flow. 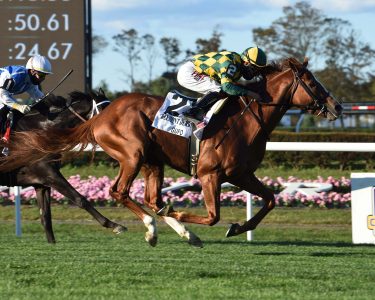 Gufo at the Belmont Derby – Courtesy of NYRA press release

I’m not going to make another bet until Saturday, when an excellent card at Belmont Park offers five stakes. Three of them appear to offer betting opportunities, so let’s see if we can make a little money at the big horse park on Long Island.

Lemista (2) makes her North American debut for Chad Brown, one of the best at winning off the layoff. She appears to have an edge at the 1 1/16-mile distance over her main rivals, Harvey’s Lil Goil (1) and Civil Union (5).

They also are coming off long breaks, not having run since running third and fifth, respectively, in the Breeders’ Cup Filly & Mare Turf. That race was at 1 3/16 miles, which is more to their liking. Lemista won four in a row last year in Ireland, three at a mile, and all on soft ground. About three inches of rain fell early this week at Belmont, with more likely Friday, so there should be some give in the turf.

Once upon a time the Peter Pan was a popular prep for the Belmont Stakes, but it’s been out of fashion for decades. Tonalist swept both races in 2014, which hadn’t happened since A.P. Indy did it in 1992.

This year’s field of six is second-rate at best, led by trainer Bill Mott’s Nova Rags (2), whose best performance was a second in the Grade 3 Sam Davis Stakes Feb. 6 at Tampa Bay Downs. Brown will run Grade 3 Withers winner Risk Taking, a seventh-place dud last month as the 2-1 favorite in the Wood Memorial. Deep closer Overtook (1), from Todd Pletcher’s barn, was second in the Withers.

Gufo (8) has excelled for Christophe Clement, going 5-for-8 on grass, with two defeats by a head and a neck to Grade 1 winner Domestic Spending. Not having run since Nov. 28 shouldn’t be a problem for an outstanding layoff trainer.

The wild card is Brown’s Sovereign (1), making his North American debut after a 2-for-14 career for O’Brien at the top level in Ireland and England. Last summer he ran second to all-time great Enable, a two-time winner of Europe’s most prestigious race, the Prix de l’Arc de Triomphe. He hasn’t run since late November when he was a close third in faraway Bahrain. Brown should have him ready, and the likely cut in the ground should help. If the money shows, he could be the one.

Channel Cat (5) has earned almost $1 million on grass but has lost nine in a row since July 2019. He’ll probably be in front to the top of the stretch when I expect him to fade.