After a one-year absence, the San Felipe Stakes (G2) is back and loaded with talent, featuring a pair of unbeaten colts trained by Bob Baffert, 2-year-old champion Storm the Court and the impressive Honor A.P. making his 3-year-old debut.

Saturday marks the 83rd running of the San Felipe, Santa Anita’s traditional prep for the Santa Anita Derby (G1) that was canceled last year due to the track’s safety-related suspension of racing during a rash of horse deaths.

Named for a Mexican town on the Gulf of California, the San Felipe has consistently drawn some of the best 3-year-olds whose connections have high Kentucky Derby hopes.

The San Felipe has produced 12 Derby winners, including five who completed a San Felipe-Derby double. Also, 12 San Felipe winners went on to win the Santa Anita Derby, and three went on and won the Run for the Roses, including 1978 Triple Crown winner Affirmed. Some of the bigger names listed in the San Felipe archives include California Chrome, Pioneerof the Nile, Medaglia d’Oro, Point Given, Fusaichi Pegasus, Bertrando, Sunday Silence, Hill Rise and Determine.

Thousand Words won the Los Alamitos Futurity (G1) and Bob Lewis Stakes (G2), while Authentic comes into the race off a 7 ¾-length romp in the Sham Stakes (G3). Both drew middle posts in the field, with Authentic the 6-5 morning-line favorite.

Thousand Words is one of two horses raced in partnership by prominent owners Albaugh Family Stable and Spendthrift Farm and the duo paid $1 million for this son of fellow San Felipe winner Pioneerof the Nile when he was a Keeneland September yearling in 2018.

Since then he’s won all three of his races, including the aforementioned stakes, and sits among the top of Baffert’s large pile of promising runners.

Flavien Prat stays aboard instead of riding Storm the Court, but it wasn’t really a choice. He had committed to riding Thousand Words in here when Storm the Court was headed to next weeks’ Rebel Stakes (G2) at Oaklawn Park, so when trainer Pete Eurton called the audible on his champion he also knew he’d be seeking a new rider. Thousand Words is a gritty type who grinds out his wins with sheer determination rather than opening lengths, and it bodes well for him that he can sit off the pace or up on it, using his tactical advantage as best he can. He has some solid speed, pace and class figures and a clean trip may be all he needs.

David A Bernsen LLC, Exline-Border Racing LLC, Dan Hudock and Susanna Wilson’s Storm the Court ran an uncharacteristic fourth in the seven-furlong San Vicente (G2) a month ago, but it’s easy to argue a few things about that effort: he was short on training after a bit of a winter freshening, seven furlongs is absolutely not the best distance for this son of Court Vision and he was too far back early considering his preferred just-off-the-pace running style while running shorter than he prefers. On paper, too, he surely regressed, but he has worked well since, including his last prep for this race and has room to return to old form. Joel Rosario will ride for the first time.

“Rosario wasn’t able to work him for me yesterday,” Eurton said, referring to Storm the Court’s 5-furlong bullet move in 59.40 on Sunday. “But Umberto (Rispoli) worked him for me. I was very pleased with it. He couldn’t look any better. This is his second race back and we’ve still got another two months (before the Kentucky Derby on May 2).” 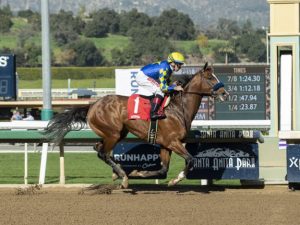 SF Racing LLC, Starlight Racing, Madaket Stables LLC, Frederick Hertrich III, John D. Fielding and Golconda Stables’s Authentic makes his third start and first since winning the Sham more than two months ago. This $350,000 son on Into Mischief, who is sure to be part of the early pace under Drayden Van Dyke, has looked nothing short of spectacular while training every morning (his bullet work in 1:12 4/5 on Monday was exceptional) and it is widely speculated that he is one of his trainer’s favorites.

The best thing about this colt is that despite his big speed figures, he actually has room to improve which if he can make the potential virtually endless. If he can put all the crowd noise and activity out of his mind and will give his rivals all they can deal with if he doesn’t meander down the stretch.

“I think the noise from the crowd made him react the way he did there in the stretch,” said Van Dyke said of the colt’s behavior in the Sham. “I told

Bob when he broke his maiden he was my favorite 2-year-old. He’s very talented.”

C R K Stable’s Honor A.P. makes his first start against winners and his first since breaking his maiden at a mile five months ago. A lot has been said about this colt, most of it regarding his handsome and flashy looks, but trainer John Sherriffs has been high on his ability and potential, which says a lot considering the trainer of the great Zenyatta isn’t one to gush much.

He is bred for the distance and shows a steady stream of works for nearly three months. Mike Smith will be back aboard, which considering he’s a Triple Crown winner, bodes well for this son of Honor Code. Rockingham Ranch’s Wrecking Crew has a bunch of graded stakes placings since breaking his maiden at first asking at Del Mar back in July, including a third in the Breeders’ Cup Juvenile, but he hasn’t raced since a disappointing fourth in the Los Alamitos Futurity three months ago. He also picks up the fifth jockey in his sixth start as Tyler Gaffalione will ride as he’s in town to pilot Got Stormy in the Kilroe Mile (G1).

Fort McHenry, better known as California Chrome’s little brother by Tapit, makes his graded stakes debut for his new connections after being sold privately last month. Now in the barn of Doug O’Neill and racing for a partnership known as Purple Rein Racing. He’s a handsome gelding, but he’d have to really improve a lot with his current connections if he wants a share. Abel Cedillo rides.

Swagsational, riding a three-race win streak at Turf Paradise including a maiden $10,000 score in his eighth start, is being tossed to the wolves here. He seems so very overmatched, but stranger things have happened. Not so long ago the reigning champion 3-year-old and inaugural Saudi Cup winner Maximum Security wore a $16,000 price tag.

The San Felipe is worth Derby qualifying points of 50-20-10-5 for the first four finishers.