Breeders’ Cup Pre-Entries: Baffert has 3 for the Classic; Distaff likely for Swiss Skydiver

As usual, it’s all about Bob — mostly.

A total of 201 horses were pre-entered Wednesday for the 14 Breeders’ Cup races at Keeneland on Nov. 6-7, with Preakness-winning filly Swiss Skydiver cross-entered in the $6 million Classic and the $2 million Distaff. 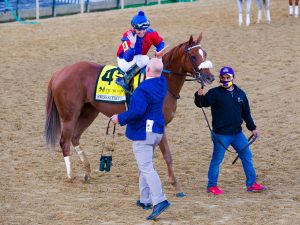 The post-position draw is Monday (Nov. 2), and sometime before then owner Peter Callahan and trainer Kenny McPeek will have to declare which race their 3-year-old star will run in. The Distaff has been designated as her first preference.

Despite the filly drama, the Classic will be THE race of 2020 – the year of the COVID-19 pandemic that re-configured the racing schedule. Pre-entries are up 7% from last, even the with pandemic that turned the Triple Crown races from a five-week sprint in May and June to a 15-week marathon from June-October.

“We’re going to see how the Classic looks,’’ McPeek said on a Breeders’ Cup conference call. “We haven’t been able to sit down and check the past performances, but we’ll do that next week. It isn’t a decision set in stone yet. All along me and owner Peter Callahan said the Distaff was the likely spot. We’ll probably make the decision in the next couple of days.”

That brings us back to Bob, as in Hall of Famer Bob Baffert, as in Breeders’ Cup top-earning trainer at $30 million – with three Classic wins.

Eleven horses were pre-entered in the 1 ¼-mile Classic, the showcase event likely to determine several Eclipse Award winners including Horse of the Year.

Baffert believes all three of his horses are coming into the race in top form.

“[Improbable] always showed a lot of talent as a 3-year-old, but he wasn’t physically or mentally mature. But what a difference a year makes,’’ Baffert said. “[Authentic] is another one who’s maturing. He was a late foal, and I think he’s still a little bit green. I think he ran a good race in the Preakness (second), but the filly got the first move on him and he couldn’t get by her. I just think he needs to be ridden aggressively from the gate.”

If Swiss Skydiver runs in the Distaff against her own sex, the Classic field would be reduced to 10. A field of 11 was pre-entered for the Distaff, including likely favorite Monomoy Girl, winner of three straight this year in her remarkable comeback from a two-year layoff. A choice to go in the Classic would put the Belmont, Derby and Preakness winners in the same field.

A full field of 14 was pre-entered for the $2 million Juvenile (G1), with one also-eligible. The likely favorite will be unbeaten Jackie’s Warrior for Hall of Fame trainer Steve Asmussen. The 2-year-old is 4-for-4, including victories in the Hopeful (G1) and the Champagne (G1).

Also pre-entered by Baffert are Gamine in the $1 million Filly & Mare Sprint (G1) and Princess Noor in the $2 million Juvenile Fillies (G1).

The $31 million Breeders’ Cup begins Friday with five races, all for 2-year-olds. On Saturday, the remaining nine races take place.

A total of 39 international horses were pre-entered, according to the Breeders’ Cup – down from 47 a year ago.

A total of 48 horses pre-entered earned fees-paid berths the Breeders’ Cup “Win and You’re In” series of automatic qualifiers.

Also announced Wednesday is the order of races (all times ET):

The race carries a guaranteed purse of $6 million, including travel awards. Horses pre-entered are:

The LONGINES BREEDERS’ CUP DISTAFF (GI) is a 1 1/8-mile race for fillies and mares, 3-year-olds and up.

The race carries a guaranteed purse of $2 million, including travel awards. Horses pre-entered are: