It all began with a mass exodus from New York City, with the wealthy trotting along in horse-drawn carriages while the commoners rode in packed trains. The destination: Jerome Park, a 250-acre estate just north of Manhattan. The date: June 19, 1867. The occasion: the first Belmont Stakes. 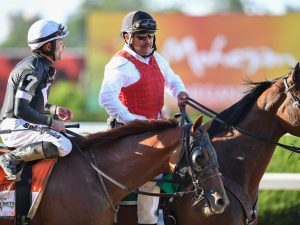 Wall Street financier Leonard Jerome, the future maternal grandfather of Winston Churchill, was among the throng that sunny Thursday morning. The host of the big day was trying hard to arrive on time, driving his four horses above the 7-mph speed limit in Central Park. Behind him was his cousin, another New York big shot whose name is part of racing history. William Travers was proceeding more slowly in his two-wheeled, trotter-powered caleche.

Long before the automobile, there was New York gridlock.

Passengers streamed out of trains at the Harlem Railroad terminal and headed for Jerome Park’s entrance a mile away. Railbirds from the lower classes were swilling beer and bourbon and mocking the high rollers. Traffic, excess, class struggle — a New York moment for the ages.

Swanky as could be

Sparing no expense, Jerome had opened his horse palace the year before. After laying out the massive sum of $250,000 (about $3.9 million today) for the property, he created a state-of-the-art showplace. The two-story grandstand seated 8,000, while a clubhouse accommodating 2,500 provided a ballroom and fine dining to the elite. There also were bedrooms where behind closed doors the patrons of the turf and their mistresses could talk horses.

Besides catering to the upper crust, Jerome didn’t forget “the little people,” as future Gotham honcho George Steinbrenner called them. Jerome laid out the course so that those who couldn’t afford a ticket could watch from nearby “Dead Head Hill,” where entrepreneurs sold sandwiches, lemonade, beer and bourbon.

The first Belmont Stakes aroused more enthusiasm among the public than among trainers. A field of only four ran 1 5/8 miles on a circular course with a hill in the middle. The heroine was a bay named Ruthless, one of only three fillies to win a Belmont. She was timed in 3 minutes, 5 seconds on a course rated “heavy,” meaning muddy. According to the chart caller, she won “cleverly by a head” over DeCourcey. The New York Times reported Ruthless finished “galloping along as if she was at exercise.”

The winner’s share of $2,500 went to owner Francis Morris, whose son Francis Jr. would build Morris Park, site of the Belmont from 1890-1904. DeCourcey’s owner, B.F. Forbes, received $300 and “an English racing saddle, made by Merry, of St. James Street, London, to be presented by Mr. Duncan.”

Believe it or not, only $325 was bet officially on the race, with $260 of it on Ruthless and her entry-mate, Monday, who finished last. We don’t know how much was risked with bookmakers and in man-to-man bets.

The first Belmont began another tradition: domination by favorites. In 151 runnings, 63 have won, a remarkably high percentage of 41.7. As the saying goes: “In old New Yawk, they love the chalk.”

Jerome and his friend August Belmont were the movers and shakers responsible for racing’s rise to prominence in New York after the Civil War. Belmont was an agent for the Rothschild family, an international banking superpower, in his native Germany before coming to America in 1837. By 1840 the 27-year-old was one of the wealthiest bankers in the United States, and his ambition extended far beyond being rich.

Belmont was a trend setter, gourmet, art collector and a force in politics, serving for 15 years as the chairman of the Democratic National Committee. As one New York critic wrote: “People like Belmont and Jerome do not enter Society, they create it as they go along.”

The two founded the American Jockey Club in 1866. Richard Sowers, in “The Kentucky Derby, Preakness and Belmont Stakes: A Comprehensive History,” writes that Jerome hand-picked Belmont, a newcomer to racing, “because he could think of no one who was more widely respected or whose integrity was as universally admired.”

Universally? Not quite. Some called Belmont a robber baron, and he would make enemies by proclaiming “Racing is for the rich.”

“The King of Fifth Avenue” also aspired to be the king of the turf, so he sponsored a yearly race named for himself. In 1869, Belmont owned two highly regarded 3-year-old colts, Fenian and Glenelg, and desperately wanted to win his own race. Glenelg looked like the Belmont’s now horse after turning in a brilliant workout for what would be his career debut. His owner had other ideas.

Glenelg ended up being far superior to his stablemate, earning the divisional championship that year and the next and leading the American sires list in 1884. But Belmont wanted Fenian in the winner’s circle, because unlike Glenelg, he’d bred him at his Long Island stud farm. In the words of Kurt Vonnegut, “Vanity rather than wisdom determines how the world is run.”

Belmont entered both horses in the third running of the Belmont, in which jockey Charlie Miller pushed Fenian hard from the start while Glenelg was kept from doing his best until far too late. Front-running Fenian, “in the commonest of canters,” held off Glenelg by four lengths in a Belmont-Belmont 1-2 finish. As racing historian Walter Vosburgh wrote: “Glenelg’s jockey, Fleming, almost had to pull his head off to let Fenian finish first.”

Another observer wrote: ‘’Glenelg might have won had he been wanted.”

Hmm. What does “been wanted” mean? Well, it refers to a little-known rule that covered intent involving entries.

Listen to author Eliza McGraw in “Here Comes Exterminator!”: “The rule basically said if an owner entered two horses in the same race, he could declare one to win. That is, a jockey would not be penalized for holding back the other horse … The rule also helped bettors, who could then understand which horse they should put money on.

“August Belmont had Fenian declared to win for the 1869 Belmont Stakes.”

A 1923 article in The Thoroughbred Record also said Fenian had been declared to win.

All right, so technically, nothing illegal occurred. The letter of the law was followed, if not its spirit. Still, perhaps the racing gods were offended. Belmont never won another Belmont. Fleming (first name unknown) never rode in another. It’s believed that Fenian, who had bad legs, never ran again, but in the long run history was kind to him. Atop the Belmont Stakes trophy that’s awarded every year is a silver replica of a horse.