Are You Ready for Some Harness Racing?

Harness racing continues to get back into action. In addition to Ohio’s Scioto Downs and Northfield Park, the next 10 days also will see the return of Buffalo Raceway, Tioga, the Meadowlands and Vernon Downs.

The situation was up in the air at Vernon over purse allocations. Two old adversaries–Joe Faraldo, the lawyer representing the Harness Horse Association of Central New York (HAACNY), and Jeff Gural, the owner of Vernon Downs–were at odds.

Gural contended that since the Sire Stakes purses were set at the end of the 2019, they should not be subject to cuts. Faraldo pointed to the current agreement that says the purse ratio between overnights and stakes races is 90/10 and leaving Sire Stakes purses untouched would alter those numbers.

On May 31, an agreement was reached between Gural and the HHACNY. The HAACNY has agreed to a one-time waiver that will allow the 90/10 purse allocation to be altered for 2020. This means the overnight purses will be cut and Sire Stakes purses will not. In return, the horsemen get a two-year extension of the current contract through Dec. 31, 2023.

The stakes races will be fully funded, and the horsemen get some peace knowing that they have a secure deal for two more years. This means Vernon is on target to open June 10.

This scenario reflects a familiar tussle at harness tracks. Stakes races bring attention to the tracks, which advertise that stakes action is coming and that this is the night to be at your local track. But, stakes races can adversely impact local horsemen.

The Sire Stakes attract the best 2- and 3-year olds in the state. When the Sire Stakes come to a track like Vernon Downs, the card is filled with those races and the horses are driven by the stars — Scott Zeron, Brian Sears and Yannick Gingras, to name a few — while the regular drivers are either off or driving in a limited number of races.

That’s one of the reasons Buffalo Raceway — which will reopen June 3 — opted not to host NYSS action this year. Since Buffalo closes July 18, management decided to write races for those that make their living on the

Buffalo Raceway grounds. Vernon — and Gural — offered to take the Buffalo dates contributing to some of the angst.

Racing at the two other Gural owned tracks — Tioga and the Meadowlands –will recommence June 5 and 7, respectively. New York horsemen were able to convince Gov. Andrew Cuomo to move harness racing from Phase 4 to Phase 1, agriculture, allowing it to open sooner. Casinos, which are attached to many race tracks, are in the Phase 4 reopening which will negatively impact purses. 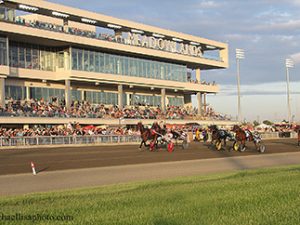 The Meadowlands is the industry’s handle leader and if numbers from Scioto and Northfield are any indication, handle should be up significantly at the Big M. Scioto Downs’ first week saw six straight handles of over $1 million and May 28, the track smashed its record high when over $1.6 million was bet on 14 races, easily breaking the previous high of $1.23 million. On May 26, a Tuesday, Northfield handled over $2 million. Could the Meadowlands hit $4 million when it re-opens Friday night?

Those numbers likely won’t last. More harness tracks will open, as will Belmont Park on June 3. By July, some team sports could be back in action with the NBA and NHL playoffs possibly taking place in August. All of this could take away from horse racing wagering.

At Buffalo, the track is implementing a ship-in limit of 75 miles and is barring horses from out-of-state or Canada to compete. In addition, there will be delays between races four and five and eight and nine to limit traffic in the paddock and to sanitize ‘high touch’ areas. It also appears that purses have not been cut. Wednesday’s “open,” will offer the same $13,000 purse that it did before the pandemic shut the track down. That’s good news for the horsemen at the “Hamburg Oval,” which will race Wednesdays and Saturdays through July 18.

Yonkers Raceway, which offers the highest overnight purses, is hoping to get back to racing by the third week of June. Unlike the other New York tracks (Buffalo, Vernon, Saratoga, Monticello, Tioga), there are few stables at Old Hilltop and most horses ship in – meaning more protocols need to be put in place. In addition, Yonkers Raceway itself was a COVID-19 hot spot and with its proximity to New York City, the concerns are greater.

Faraldo also is the president of the Standardbred Owners Association of New York (SOA of NY) and he’s optimistic about getting things going at Yonkers.

“MGM Resorts has shown an interest in returning to racing as soon as possible,” he said, “but Yonkers has a unique situation. Because most ship in, we have to do more quarantining and take extra measures to ensure safety.”

Tioga, Buffalo, Vernon and Yonkers appear to be on the same page with casinos, while the situation at Monticello Raceway is still unresolved.

Current New York law says that if there is casino on a harness track, then harness racing must be conducted. There can’t be one without the other.

“Even under these circumstances (COVID-19), you cannot let the casino companies control racing,” said Faraldo, “because once they get their foot in the door, they will kill racing. We can’t let them use these circumstances to browbeat and bully the horsemen.”

We know nothing is easy and knew that getting all the harness tracks up and running again remains a work in progress. But progress continues, tracks are running or planning to run, just in time for summer.