Aqueduct Racing Suspended: A day after announcing its “America’s Day at the Races” TV show would have expanded weekend coverage on FS1 and FS2, the New York Racing Association suspended live racing indefinitely at Aqueduct on Thursday “until further notice due to changing circumstances in the racing community relative to the coronavirus (COVID-19).” 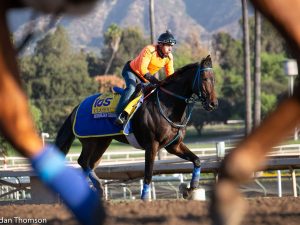 The NYRA news release also said that on Thursday morning a backstretch worker who lives and works at Belmont Park tested positive for the coronavirus.

“Following NYRA’s Preparedness and Response Plan, the worker has been quarantined since developing symptoms the morning of Friday, March 13. His roommate was also quarantined at that time,’’ NYRA said.

The release added that “NYRA’s Preparedness and Response Plan Committee has established clear protocols and processes following the most up-to-date health guidance established by the New York State Department of Health and the U.S. Centers for Disease Control.”

NYRA CEO and President Dave O’Rourke said, “This individual and his roommate have been in isolation since prior to racing last Friday and as such did not travel to Aqueduct for live racing. We are working with the County and State departments of health to ensure proper quarantine and sterilization practices will continue to be followed moving forward.

In New York, more than 4,500 cases of coronavirus have been reported, and more than 10,000 cases reported nationally as of March 19 (mid-day), according to recent data on the Centers for Disease Control and Prevention (CDC) website.

“We are focused on ensuring the health and safety of our entire backstretch community, as well as the horses in their care,” O’Rourke said. “Accordingly, we are immediately suspending racing operations until further notice to devote all our attention and resources to this effort.”

Aqueduct is the latest track to shut down racing in an effort to fight the spread of coronavirus. In recent days, the Kentucky Derby was postponed from the first Saturday in May to Sept. 5, and Keeneland in Lexington, Kentucky, canceled its spring meet scheduled to begin next month.

Most racetracks around the world that are conducting racing are doing so without spectators. The Fair Grounds in New Orleans, which features the $1 million Louisiana Derby on Saturday, still plans on live racing this weekend, as does Oaklawn Park in Arkansas, Santa Anita in California and Gulfstream Park in Florida, among others.

NYRA, which had live racing Friday-Sunday in March, also said a decision regarding resumption of racing as well as the stakes schedule, including the Wood Memorial on April 4, would be made at a later date. The Belmont backstretch and its facilities remain open to horsemen and in operation for training.

If you enjoyed this Aqueduct Racing Suspended piece, check out other amazing articles at our horse racing news section!