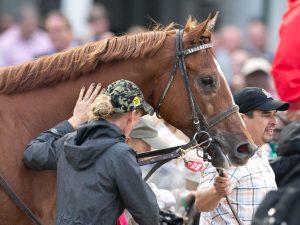 With the Kentucky Derby postponed to Sept. 5 because of coronavirus, the upcoming 3-year-old stakes no longer can really be called Derby preps.

Saturday’s Louisiana Derby, along with the Florida Derby (March 28), Wood Memorial and Santa Anita Derby (both April 4) and Arkansas Derby (April 11) will be big deals only to the horses’ connections and to horseplayers.

I’ve never owned or trained a thoroughbred, but I’ve wagered on thousands of them, so The New Abnormal works for me.

Last year’s Kentucky Derby “winner” (DQ-aided Country House), Preakness champ (War of Will) and the Kentucky Oaks heroine (Serengeti Empress) all spent the winter in New Orleans. We’ll have to wait a long time to see if those history factoids repeat, but only a little while before we can try to make money on an excellent Fair Grounds card, to be run without spectators.

Saturday’s ninth race, the New Orleans Classic, begins an all-stakes pick 4 that ends with the 14-horse Louisiana Derby, which has been stretched from its traditional 1 1/8 miles to 1 3/16. Let’s see if we can cash a nice ticket with a minimum outlay.

You can catch the first two races in the pick 4 on TVG starting at 4 p.m. ET, with NBCSN providing coverage of the Fair Grounds Oaks and Louisiana Derby from 5 to 6 p.m.

Likely favorite Silver Dust is a horse for course, with three wins and three seconds in eight starts at the old track on Gentilly Boulevard. He’s 0-for-4 with two close seconds at 1 1/8 miles, though, so maybe he’s vulnerable. Another must-use is By My Standards, last year’s Louisiana Derby hero, who has three wins, a second and a third in five starts at the Fair Grounds.

I’ll also throw in Todd Pletcher’s up-and-coming 4-year-old Fearless, who’s 2-for-2 but steps into stakes company for the first time. He might be this good.

This looks like a classic spread race, which means an 8-5 favorite probably will dominate. Let’s act as if that won’t happen.

Dot Matrix, Chad Brown’s tough pair of Rockemperor and Instilled Regard, the classy teaser Channel Maker, speedy Factor This and course specialist Synchrony (4-for-6 at Fair Grounds) all are on the ticket. May the longest price win.

This “prep” for the Kentucky Oaks shapes up as an ideal spot for a single to pare down the ticket. The standout in a short field is Finite, winner of five in a row and never worse than second in seven starts. She’s 3-for-3 around two turns and 2-for-2 at the Fair Grounds, including a 4¾-length runaway last month in a Grade 2. Her five opponents aren’t in her class.

Deep closer Enforceable is a deserving favorite after finishing second despite a brutal trip in the tougher division of the Risen Star. He had traffic trouble most of the race and showed unusual gameness and a rare ability to accelerate after getting stopped. He’s won twice around two turns while coming from far back and could do that again.

There’s enough speed (Wells Bayou, Ny Traffic) to set up a horse coming from off the pace, but if Enforceable (post 10) has another rough trip, maybe a stalker or midpack runner can beat him by getting first run.

That’s why I’ll also be using Major Fed, California shipper Royal Act and Silver State. To guard against a wire-to-wire winner, I’ll put in Wells Bayou, whose figures say he has the best chance of making an easy lead from post 3.