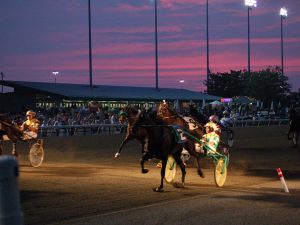 Meadowlands Pace night offered plenty for harness racing fans. Nine of the 13 races had purses of at least $100,000, and there were equine stars in each and every race, with a big crowd to boot. So on a Saturday night like this, what do you look for?

The Pace, a Meadowlands original., featured a wild, blanket finish as Best In Show found room on the rail to win in 1:48 for the mile at 27-1 odds, rewarding supporters with a $56.20 payoff on a $2 bet.

The win was a historic one. The colt is trained by Linda Toscano, who on July 7 became the first female trainer to be inducted into the Harness Racing Hall of Fame, and then followed that up by becoming the first female trainer to win the Meadowlands Pace.  The heavy favorite, Captain Crunch, finished fourth. He took the lead early, but by the time he hit three-quarters in a sizzling 1:19.3, he was showing signs of fatigue that opened the door for the upset.

The Pace wasn’t alone in drama. The first came in the form of New Zealand-bred Shartin N, last year’s runner-up for harness racing’s Horse of the Year. This year, she is running like she took the slight personally. She was entered with 10 others in the Golden Girls, a race that was contested at 1 1/8 miles.

When the race started, she was in no hurry. She settled in fourth but by the quarter post it was over; she cut the easy fractions and even though Meadowlands track announcer Ken Warkentin tried to create drama with the charging Caviart Ally, the outcome was never in doubt. After clipping the mile in 1:48.4, she cruised home in 2:02.1 to pick up her 10th win in 11 starts this year.

Could she take on the boys? It would be a more than a fair fight. Will Shartin N lose again this year?  Most likely, yes, because of the frequency that these horses race.  She will get behind the gate and will have an off-day and will come up short, but right now, in a big race, I would not bet her against her and I’m far from alone here.

The other all-star performance belongs to Lather Up, the 4-year old by I’m Gorgeous. Last week, he tied the world record for fastest mile ever by a standard-bred when he finished in 1:46. So the natural question before his race was simple: Did he empty his tank in that performance?

The answer: No. Like the Golden Girls, the $423,000 William Haughton Memorial, because of the overflow 12-horse field, was run at 1 1/8 miles. And, like Shartin N, there was never a doubt about the best horse.  Last week, Always A Prince pressed the pace, and tried to do so again.  However, he just ran out of gas. Lather Up took the lead by the quarter and then put on a show. He passed the mile in 1:47.4, a time that would win 95 percent of one-mile paces and then glided the last eighth in 13.2, completing the journey in 2:01.1.

After back-to-back blazing performances, one would assume that Lather Up will take at least a week off. My guess is that he takes a week — or two — of well-deserved rest before gearing it up again. I would not be surprised to see him in the $260,000 Sam McKee Memorial Pace on Hambletonian Day, Saturday, Aug. 3.

When you watch big events, you look for greatness.  Of course, we all have our rooting interests. Aside from that, if your team, or in this case your horse, doesn’t win, you look for a takeaway — something you will remember years down the road. On July 13, at the Meadowlands, you saw that with both Shartin N and Lather Up. On a night when the stars came out, these two — one male, one female – shined the brightest of all.