Named for California’s premier southern city, the San Diego was first run in the track’s first season in 1937 and has grown in prominence and stature on the national racing scene in recent years.

The great California-bred gelding Native Diver was the first to put the race on the national map, winning it three times from 1964 to 1966. The future Hall of Famer’s story is not all that different from dual Horse of the Year California Chrome’s, who won this race in 2016 — both Cal-breds were out of inexpensive mares who were bred to young and unproven stallions. Both ran well beyond their pedigree expectations and both represented somewhat humble California connections.

Bates Motel, the champion older horse of 1983, Breeders’ Cup Classic (GI) winner Skywalker, millionaire Skimming in 2000 and 2001 (en route to his back-to-back wins in the Pacific Classic), Kentucky Derby (G1) winner Giacomo in 2006, Dubai World Cup (G1) winner Well Armed, champion and last year’s BC Classic and Pacific Classic winner Accelerate are just a few of the names to have won the San Diego in years past. 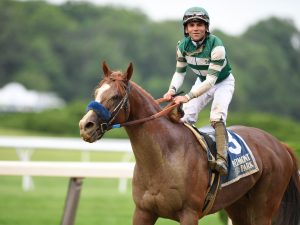 Last year’s winner Catalina Cruiser returns to defend his title and will face five others. The Hronis Racing-owned son of Union Rags won the True North Stakes (G2) at Belmont last out in what was his first start of the year and his first since his sixth-place finish as the 4-5 favorite in the Breeders’ Cup Dirt Mile (G1). With his eyes on the Pacific Classic in a month, this is the logical step for the John Sadler trainee.

Joel Rosario will be in town from New York for the mount and will lead the field to post.

Higher Power is Hronis/Sadler’s other runner and coming off a wire-to-wire allowance win at Santa Anita a month ago. He’s been productive at that level and makes a logical return to stakes company here.

Hall of Famer Bob Baffert nominated a trio to the San Diego, but will only send out his wife’s horse, Dr. Dorr. The son of Lookin At Lucky hasn’t won a race in more than 16 months since taking the 2018 Santana Mile at Santa Anita, but has put in some strong performances against some decent horses, including a second in this event last year and in the Gold Cup at Santa Anita (GI), both behind champion Accelerate.

Baffert uses the services of his old friend Rafael Bejarano, who hasn’t been aboard one of his runners in the afternoon in quite some time.

Trainer Pete Eurton sends out a pair in Core Beliefs and Draft Pick, two 4-year-olds who have been close to the elite level but have yet to break through. Core Beliefs, who is coming off a flat sixth in the Gold Cup at Santa Anita in his last start two months ago, won the New Orleans Handicap (G2) at Fair Grounds in a mild upset back in March, and also last year’s Ohio Derby (G3), and has always been close when in tougher company but seems to just fall a smidge short. He has won his only start at this distance and gets the benefit of jockey Flavien Prat for the first time in three races.

Draft Pick took a while to break his maiden but soon after doing so last year won the Affirmed Stakes (G3) and was second in the Los Alamitos Derby (G3) and West Virginia Derby (G2) last year. Off for 10 months, the son of Candy Ride has an allowance win at Santa Anita to his credit a month ago and has been working well since. Martin Garcia will ride.

Mongolian Groom may not be a world beater, but the son of Hightail has managed to pull off some fancy finishes in tough company. Abel Cedillo rides for the first time.

The weather in Solana Beach is expected to be typically beautiful on Saturday, with afternoon highs in the mid-70s.The San Diego is the day’s fourth race with a post time of 3:37 p.m. PT.