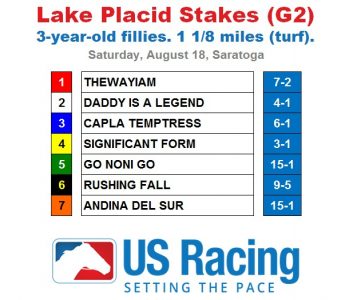 The Lake Placid Stakes (G2) for 3-year-old fillies on the turf — which is officially rated as “soft” at press time — and the Alabama Stakes (G1) for sophomore fillies on the dirt run as the eighth and ninth races today at Saratoga and could offer some value to fans of the rolling double.

A rolling double requires bettors to select the winner of two designated races and the Lake Placid-Alabama double looks intriguing to me.

While RUSHING FALL (9-5 morning line odds) looks like a legitimate favorite, I was extremely impressed by DADDY IS A LEGEND’s performance in the Lake George Stakes (G3), in which she recorded a fast time and a superior late speed ration (LSR). The George Weaver trainee is 4-1 on the morning line.

I’m also intrigued by SIGNIFICANT FORM (3-1), who has been favored in all of her starts at the age of 3. 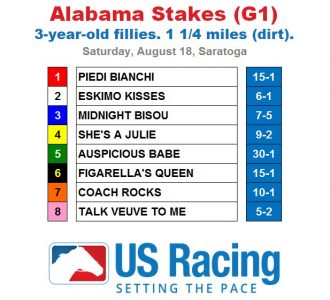 While the morning line favorites — MIDNIGHT BISOU (7-5) and TALK VEUVE TO ME (5-2) — merit some pari-mutuel love, I suspect that love will be smothering. And I simply don’t think they are that much better than some others in here.

Among the longer-priced fillies I fancy are SHE’S A JULE (9-2), who wins with a repeat of her last — an impressive score in the Iowa Oaks (G3), in which she recorded a -5 LSR.

I also love the LSRs that AUSPICIOUS BABE has earned, although she’ll need to run faster than she ever has before to be a factor on Saturday.