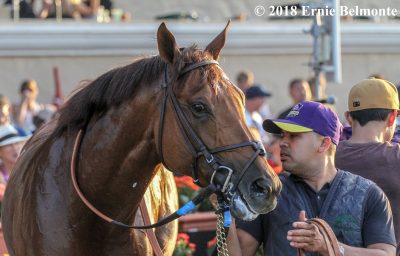 (Breeders’ Cup press release) — Hronis Racing’s 5-year-old Accelerate, the 2-5 favorite, shot to the lead with three-eights-of a mile remaining and romped home to a 12 ½-length victory over Pavel in the 1 ¼-mile, $1 million TVG Pacific Classic (G1) at Del Mar racetrack on Saturday, and became the fifth horse to qualify for the $6 million Breeders’ Cup Classic (G1) this year through the Breeders’ Cup Challenge Series.

The Breeders’ Cup Challenge is an international series of 85 stakes races whose winners receive automatic starting positions and fees paid into a corresponding race of the Breeders’ Cup World Championships, which will be held at Churchill Downs in Louisville, Kentucky on Nov. 2-3.

As a part of the benefits of the Challenge series, the Breeders’ Cup will pay the pre-entry and entry fees for Accelerate to start in the Classic. Breeders’ Cup also is providing a $10,000 travel allowance for all horses based outside of Kentucky to compete in this year’s Championships.

A chestnut son of Lookin at Lucky out of Issues by 1998 Breeders’ Cup Classic winner Awesome Again, Accelerate established a new stakes record with his 12 ½ length margin of victory in the Pacific Classic. Accelerate ($2.80) covered the 1 ¼ miles in 2:01.83 over a fast track.

Bobbling slightly at the start in the seven horse field, Rosario moved Accelerate to engage pacesetters Roman Rosso and Prime Attraction up the backstretch racing three paths off the rail, in fractions of 46.69 for the half mile and 1:11:24 through three quarters.  At the end of the second turn, Accelerate suddenly surged away from his rivals to a four-length lead at the mile mark in 1:36.1. He increased his margin to eight lengths in the stretch, and sailed home uncontested.

Accelerate was bred in Kentucky by Mike Abraham.

“It was very impressive. He’s been good on this track, he’s won stakes here every year, said Sadler. “He’s better this year so you had to figure he’d be better on this track this year. The only thing I was nervous about was Joel [Rosario]. I told him ‘Ride him like he’s the best horse. Don’t let anything cheap get in front of you. Stay in contact with the leaders’. He did that, so I knew [Accelerate] would kick in well.

“I thought we had the best horse. He had a really good week. I woke up this morning refreshed. The toughest thing all day was getting into the parking lot.”

Accelerate improved his career mark to eight wins in 20 starts. Today’s victory was his fourth of the year, having previously won three of them at Santa Anita Park: The San Pasqual (G2) and the Santa Anita Handicap (G1), and most recently, the Gold Cup at Santa Anita on May 26. His lone defeat in 2018 was a second-place finish in the Oaklawn Handicap (G2) in April.