Abel Cedillo: Soaring to the Top of the SoCal Jockey Ranks

Abel Cedillo jumped into the deep end of the pool by uprooting his family and moving his tack from the Northern California circuit, where he was a fixture for 10 years and leading rider, to the far more competitive Southern California tracks last summer.

Right away the other jockeys in the room at Del Mar pronounced him a future star.

But they weren’t psychic. Cedillo’s soft hands, good seat, and knack of getting horses to relax and run for him were apparent immediately to almost everyone.

The decision to step up his career, made with the backing of agent Tom Knust and trainer Doug O’Neill, proved to be a wise one for the native of Nebaj, Quiche, Guatemala. Cedillo was the third-leading rider at the 2019 Del Mar summer meet, tied for the title with Flavien Prat at the Santa Anita fall meet, and completed the circuit atop the leaderboard at the Del Mar fall stanza. 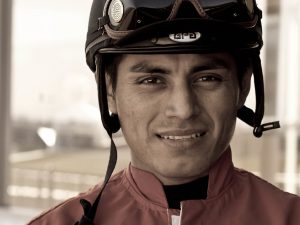 Cedillo, 31, won seven graded stakes, capped by his first Grade 1 score in the Awesome Again at Santa Anita on the ill-fated Mongolian Groom in 2019. He finished the year with 208 victories. His mounts earned $6,277,622 to double his bankroll from 2018, and his season was so impressive that it netted him honors as the TVG Breakthrough Jockey of the Year.

But he didn’t rest on any laurels. When the COVID-19 pandemic interrupted Santa Anita’s winter meet, he finished second in the standings behind Prat and added two Grade 1 wins to his career total of 15 graded stakes scores. He rolls into the Del Mar season, which kicked off Friday, as the go-to guy.

The 5-foot-3, 116-pound Cedillo was named to ride in all 10 races on the opening day card, winning one, and Jeff Mullins gave him a leg up on KP All Systems Go in the Runhappy Oceanside Stakes in which they finished seventh.

“He’s a really likeable young and up-and-coming rider,” said Phil D’Amato, one of the many top trainers now vying for his services. “He’s the perfect build to be a jockey. He doesn’t have to worry about his weight. He’s the right size.

“What I really like is he listens, which is key for most successful riders. The other important factor about Abel is that not only does he listen, he learns. He’s one of those riders who if he does make a mistake, he’ll tell you. Good riders try not to make the same mistake twice and that’s who Abel is. He’s a student of the game.”

Cedillo, who said what he loves the most about this job is the horses, is a quick learner. Hall of Fame rider Mike Smith has been his professor.

“There is always more to learn. I learn more every single day and with every single horse I ride,” said Cedillo, who pours over the past performances for his races and watches replays religiously. “Mike is a really good guy and he has been very good to me. When I moved down here he gave me a lot of help. I try to learn a lot from him.

Getting position was one of the lessons.

“That’s what I learned from Mike. You have to break good with your horse and put him in a good position, you have to decide to stay back, stay close, or put him on the lead. That’s what I try to do. But it doesn’t always work out the way you plan so you have to use your head,” said Cedillo.

Said D’Amato, “More times than not he puts the horses in the right position to win. That’s what I like to see. If the horses aren’t good enough, they’re not good enough, so be it. But as long as you put them in the right position you give them a chance to win, and Abel is really good at that. He’s a strong finisher and he’s equally good on dirt or turf, going short or long.”

There is a long list of jockeys who skyrocketed to the top, let it swell their heads so much that their helmet no longer fit, and then they crashed and burned. Cedillo does not seem destined for the same fate.

“With Abel, not at all. Not in the slightest. In the time I’ve known him since the beginning (of coming to the Southern California circuit) to now, nothing about him or his attitude has changed. He’s very honest and to the point and he takes the game seriously,” said D’Amato, who teamed with him to win the 2019 John Henry Turf Championship Stakes (G2). “He’s very humble. He has all those traits that are going to help him along the way to continue to stay on track as he continues to win races.”

To that point, Cedillo, who has won close to 1,300 races with just over $27 million in earnings, through July 10, still works as diligently as if he were an apprentice. He’s on the backside six mornings per week working as many horses as he can and then rides as many as he can in the afternoons.

“It’s a lot of work, but I like to work very hard. I love it,” he said. “I’m just the same person I was at the beginning on my career. I’m not changing anything. There’s no point to change. I don’t think, ‘Now I have this. Or now I can have that. Or now I’m doing this.’ No, no. I am the same and I try to stay the same all the time.”

He may be the same person, but as a rider he’s only changing for the better.

“With Abel from the get-go, he’s just a very hard worker with loads of ability. He just continues to develop. Not only is he winning stakes for me, he’s winning them for guys like Bob Baffert and John Shirreffs and on and on and on, and that shows me the mark of a top rider,” said D’Amato.

Still, it’s not all work and no play for Cedillo, who has a young son with wife Yasmin.

“I play golf. I enjoy it because for one day in the week I can forget about racing. My handicap is 15, but I just started nine months ago. I play with Flavien Prat, Drayden Van Dyke, and a lot of the guys. We just go out and have fun and get away from it all,” he said.

Then it’s back to business.

“Thanks God, my agent and I have a lot of business. Right now I am riding for everybody and I love it. Many trainers are giving me a lot of opportunities and I am getting to ride good horses. I am so happy and I want to make them happy,” said Cedillo.