Turning off the light after leaving a room, saying “please” and “thank you,” and not putting more on your plate than you can eat are examples of good habits. I’m sure many of you, like our friend Rail Guy, learned these habits at a young age and still maintain them today. For Rail Guy, maybe it’s only two out of three, but regardless these habits were learned behavior at some point in your life. 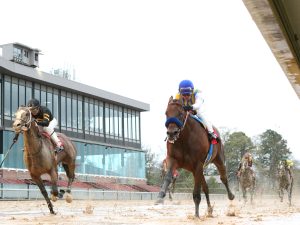 It’s hard to maintain good habits all the time. We are all going to fail at some point, even if you are doing everything right. Just because you failed at something once or had a bad run of luck is no reason to give up on it.

Successful handicappers and those who make a living playing the races are creatures of habit. They have routines and habits that they have developed and maintained over the years. There is no reason that you can’t do the same.

The first thing you need to do is to identify the habit you want to develop.

At 14 years old I thought I knew it all. I was spending my formative teenage years on the apron of the Monmouth Park grandstand with my Uncle Dutch, focused solely on the past performances.

Dutch would light a Marlboro red, grab a fresh can of Budweiser and walk down to the paddock so he could see the horses gets saddled and walk out to the track. He would encourage me to go with him, but I was happy to stay at our seats and think about my potential wagers. After all, Dutch had taught me a ton about handicapping from the past performances, what else did I really need to learn?

Most of the time, my handicapping was spot on, yet every so often I was left scratching my head about how a race played out. Dutch was quick to laugh at times as he would show me his winning tickets for that same race.

How could it be that I was handicapping the way he taught me, but I was coming up with not only different plays, but the losing horses?

Dutch had an easy answer. “You gotta see them to bet them.”

He was right. This was costing me the hard earned cash I had made mowing all the lawns in the neighborhood. It was at that point I realized the habit I wanted to develop – seeing the horses before I actually bet on them.

I knew that seeing the horses in the paddock or post parade would be added work. It would change my pre-race routine, but I was committed to not getting beaten by another horse that didn’t show up to race today, regardless how he looked on paper.

I knew it wasn’t going to be easy either. I had never spent time around horses before. It would be overwhelming with full fields of 12 horses all paraded or saddled at the same time with people and activity everywhere.

Dutch would tell me to look at a horse and list out what he saw in a quick assessment. He would go horse by horse through the field, updating previous assessments if he saw something new. I asked a ton of questions and took a lot of notes. He would ask me what I saw and we’d compare notes on more and more horses until I got the hang of it.

On the car ride home he’d quiz me on what was a positive and negative factor. My assessments got quicker and more in line with what he saw. I started to realize when I should and shouldn’t play a horse based on what I saw in those few minutes at the paddock.

Dutch had a mental checklist in the paddock. He looked a horse up and down the way a quarterback checks down his passing options during a game. Dutch started with the head.

He would assess each horse in that order and move on to the next one making notes on his past performances. By having this mental checklist he wouldn’t miss a horse with scared or lazy eyes, or the kidney sweat on a cool day.

I would adopt his top down approach and still use it when assessing horses in the paddock or post parade today.

For me the biggest obstacle in developing the habit of assessing a horse physically was my lack or knowledge of the horse’s body. I spent some time at the local library reading every book I could find about horses.

I talked to some friends who were involved with horses at the local 4H. Every holiday when would see Dutch during the school year we would about it.

I made sure that by the time the next summer rolled around that I would be prepared for the paddock.

Step 5 – Remind Yourself To Get Back At It

The following summer I was rusty. I hadn’t been handicapping since the end of the previous summer.

I felt myself slipping a bit from where I had ended the previous meet and knew I had to get back in my routine, both in handicapping the past performances and assessing horses in the paddock. I had my mental checklist for both that I knew I needed to follow, but it took a couple of days to shake off the rust.

I wrote out the steps of what I looked for in my handicapping and the horses in the paddock. See it in writing reinforced to me what I needed to do to get back on top of my game.

This is the most important step in the process. For me I found the reward was that I cashed more tickets and the bankroll I had from cutting lawns in the neighborhood grew more than the previous summer.

I allowed myself to take some of my winnings and indulge myself with some new books I wanted.

Some were handicapping related and others I had wanted to read for pleasure. I also put a nice chunk of change aside towards buying my first car, the ultimate reward for a teenager.

Even today, I don’t like to wager on a horse if I can’t see them either in the paddock or the post parade on the simulcast monitor. It is one of the good handicapping habits I have developed and maintained over the years.

Sticking with this habit through a couple of bad beats and rough patches has helped to grow my bankroll in the long run. You will find that good habits lead to profits.

What are some good handicapping habits that you have developed and maintained?