The race is still seven weeks away, but the $3 million Pegasus World Cup Invitational (G1) is worth some discussion now that winter racing is in full swing.

The “Championship Meet” at Gulfstream Park in Hallandale Beach, Florida, features its first graded-stakes race on Saturday – the Mr. Prospector (G3) – and it only gets better from there.

There are several intriguing storylines involved: it’s Team Knicks Go trainer Brad Cox and Joel Rosario versus Team Life Is Good Hall of Fame trainer Todd Pletcher and Irad Ortiz, Jr. Both trainers and jockeys are top contenders for Eclipse Awards – to be announced on Feb. 10 at Santa Anita Park in Arcadia, California.

Knicks Go won the BC Dirt Mile in 2020, then started his 2021 campaign with a victory in the Pegasus World Cup with Rosario aboard. Life Is Good, formerly trained by Bob Baffert before he was sent to Pletcher in the summer, won last month’s Dirt Mile with Ortiz aboard, and could play spoiler as Knicks Go seeks a second straight World Cup win. 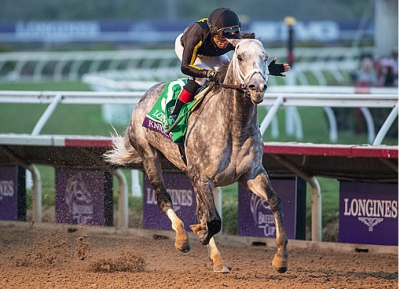 Among others who may run in the 1 1/8 mile race for 4-year-olds and up are Pennsylvania Derby (G1) winner Hot Rod Charlie, Eye of a Jedi and Brooklyn Strong. Both Knicks Go and Life Is Good are speedsters who prefer to be on the lead so this duel could start right out of the gate.

The co-feature on the day is the $1 million Pegasus World Cup Turf Invitational (G1), a race Pletcher won last year with Colonel Liam.

In a Dec. 1 workout at the WinStar Training Center in Versailles, Kentucky the soon-to-be 4-year-old Life Is Good went 4 furlongs in 49.83 seconds. It was his first work since winning the Dirt Mile 5 ¾ lengths and running his stellar record to 6-5-1-0 for owners CHC Inc. and WinStar Farm.

“He’s an extremely impressive horse to watch train. What everybody saw in the Breeders’ Cup Dirt Mile is what we’ve grown accustomed to seeing in his training,” Pletcher said recently.

Life Is Good went 3-for-3 under Baffert, including wins over Medina Spirit in the Sham (G3) and San Felipe (G2). He was sidelined with ankle chips and missed the Triple Crown races. Under Pletcher, the son of Into Mischief returned and finished a neck behind Jackie’s Warrior in the H. Allen Jerkens (G1) at Saratoga. Then came wins in the Kelso and the Dirt Mile.

“He’s got a lot of brilliance. He’s got speed and the ability to carry it over a route of ground,’’ Pletcher said. “He’s just a very, very talented, impressive horse. We’re optimistic that he’ll continue to stretch out. He certainly trains like a horse that wants to go further. We’re excited about getting him back for next year.”

Knicks Go has been the best of the best and should easily be voted Horse of the Year.

“Well in hand, and I think he was out the five-eighths in 1:01 and 3,” Cox said after the workout. “He definitely hasn’t regressed since the Breeders’ Cup. He’s been training extremely well, galloping great. Wanting to do more. You could definitely tell that the last week, 10 days, he was wanting to do more.

“He was very strong throughout this morning, around both turns and even up the backside (afterward). The outrider collected him around the half-mile pole, so he seems to be the same Knicks Go that we saw before the Classic.”

The plan for Knicks Go calls for being shipped to the Fair Grounds in New Orleans to continue training up to the World Cup. A gray son of Paynter, Knicks Go won five of seven races in 2021 with a career mark of 24-10-3-1 and earnings of $8,673,135 for owners Korea Racing Authority.