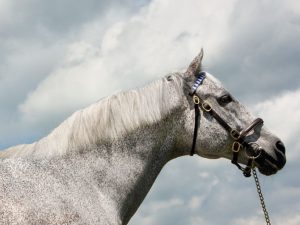 Saratoga Springs has always been a town for horses. But one horse in particular nearly turned this town on its head in 1994. Remember that streakin’ gray son-of-a-gun, Holy Bull? I’m not exaggerating here: Holy Bull turned Saratoga upside down when he won that year’s Travers Stakes under jockey Mike Smith.

Everybody from your grandma to the wee ones took their after-party to the streets. My outstanding memory of this celebratory scene was the moment some young women cruised down Broadway. They were riding in a convertible with the top down. I think a few were perched on top of the automobile’s trunk.

“Take it off, baby. Holy Bull!” some studs-in-training shouted from the sidewalk. The Bull’s name was on everyone’s lips. It was that kind of night.

Meanwhile, back at the barn, the Gray One munched his hay while still trying to catch his breath. He had to be reeling from the effort, because horses rarely do what he accomplished in this Travers Stakes. Pressured for more than a half-mile early in the running under a very fast pace, he then turned back another challenge late in the race, beating Concern by a neck, with Tabasco Cat 17 lengths behind in third.

I still have a framed photo of that finish hanging on a wall. I wrote in my column for the Lexington Herald-Leader the following day, “It’s time to put Holy Bull on a Wheaties box.”

If not the Wheaties box, then – sainthood? I can tell you that not even the local priest missed this one. At 9:30 Mass on Sunday, the morning after the Travers, the pastor at the Church of St. Peter in Saratoga made a special announcement: “All you people who had Holy Bull yesterday, please put a little extra in the collection plate.” The congregation giggled. Then you heard the soft flutter of paper money hitting the baskets as they were passed through the pews.

I never figured out how anyone left the track with enough extra money for the collection plate, as Bull was a heavy favorite in a race where the track had wisely eliminated show betting. In other words, it wasn’t a huge payoff that brought people to break out in celebration in the streets. If you bet Holy Bull to win in a straight wager, you got back $3.60. You didn’t get rich.

So, what really was Holy Bull’s charm, and what inspired his fans to keep the faith (not a pun) after he’d lost his previous race, the Kentucky Derby, finishing 12th? What brought people to carry on their horse-worship as though the Derby never happened, as though the Bull had descended on Saratoga riding a magic carpet of superstardom and good faith? Someone hung a sign with his name misspelled over the paddock fence as the Travers field assembled for saddling: “The Derby was bull. The rest were brilliant. Holly (sic) Bull will fly today.”

There is no explaining fandom. People took to Holy Bull for many reasons: he was easily spotted in his races because he was gray. His name had the timeless ring of a “papal bull,” which is an edict issued by the pope. His back story, known by all, was a sentimental tear-jerker: Holy Bull won his first race the day his owner, Rachel Carpenter, died, so she did not see him race. She had bequeathed all her horses to her trainer, H. A. “Jimmy” Croll, 74 years old the year Bull won the Travers. That was a great summer for Croll, as he was inducted into the National Museum of Racing and Hall of Fame.

Mostly, people loved the way Holy Bull won his races: with true grit. The Travers showed this trait at its best.

Which begs the question: why did Bull fail to show his usual grit in the Kentucky Derby? Croll was haunted the rest of his life with the suspicion that someone “got to” his horse with foul play prior to the Derby. He claimed the FBI interviewed him several months following the race. Neither the FBI nor the Louisville Police Department ever confirmed there was an investigation. And Holy Bull was not tested after the race for illegal drugs. Was Croll’s accusation simply the rambling of an elderly man disappointed over losing the Derby? Or was there something to his suspicion, that someone had “got to” his horse?

Holy Bull’s Derby remains one of racing’s unsolved mysteries. He won all six of the races he ran after the Derby. He broke down in 1995 in the Donn Handicap and was retired to a successful career at stud.

In my mind, Holy Bull deserved a place on the Wheaties box. He did get more: a place in the Hall of Fame. He gave us so much, in memories for the ages, and a street party no one ever could forget on one hot August night in Saratoga Springs, 1994.