Stuck at Home, Our Handicapper Travels Back to the 1983 Epsom Derby

It all looked so perfect. Out of the blue, a dream situation dropped into my lap. I retired last August when Newsday, the Long Island newspaper where I’d worked since 1983, made me a buyout offer I couldn’t refuse. 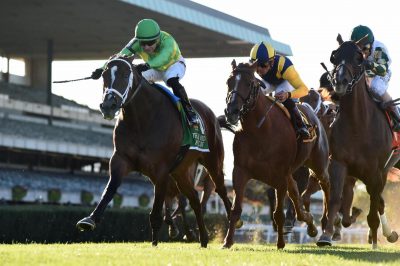 Suddenly, I had a 24/7/365 vacation to feed my obsession: to bet on site at as many racetracks as possible before being processed into eternity.

I’ll be 70 in June, and I keep thinking of a poignant line from an old Simon and Garfunkel song, “Old Friends”: “How terribly strange to be 70.” I lost five old friends in the past year, a terribly strange reminder about the sand in the hourglass.

Some run with the bulls, others hoard expensive objects. I collect racetracks. A September trip to Ireland added numbers 115 and 116, Laytown and Listowel, to my list.

In June, I’d stopped off at York and Doncaster in England, and hitting four new tracks in three months was going to be just a warmup for this year.

I could get a two-week Britrail pass and visit nine or 10 in the UK. I could take an extended road trip to the Midwest and Southwest. Or maybe spend three weeks in Australia, horse heaven with 360 tracks.

There were so many possibilities until going anywhere became impossible. COVID-19, the invisible plague no one could see coming, shut down the world and put my travel plans on hold indefinitely. With the future a blank, it’s time to reminisce, so let me entertain you with the opening chapter of my foreign odyssey.

I’d never been out of the country until the spring of 1983, when my wife, Jean, and I spent two weeks in England, Scotland, Wales and Ireland.

We made a pilgrimage to England’s greatest classic, the 1½-mile Epsom Derby, first run in 1780 and the model for the Kentucky Derby. No race has had more influence on the genetically engineered marvel that is the thoroughbred. Through the centuries, the DNA of Epsom champions has enriched the gene pool.

As Italian Federico Tesio (1869-1954) said: “The thoroughbred’s selection has depended not on experts, technicians or zoologists, but on a piece of wood: the winning post of the Epsom Derby.”

“The Wizard of Dormello” was the greatest breeder of the 20th century. Tesio was always smarter.

There had been so much rain in May that there was talk of postponing the Derby because of a water-logged course. If so, our tight travel plans would have made us miss it. A downpour the night before worried me, but the skies cleared before dawn and the big race was on.

Jean and I took a packed morning train from London to Epsom Downs, whose crowd exceeded 100,000, including the Royal Family.

Before the first race I walked up to one of the many on-course bookmakers and made my first bet in a faraway land. In the next 36 years, there would be hundreds more.

The undulating, left-handed course was a swamp, with the time of 2:49.01 the slowest of the century.

Those who backed the 9-2 favorite didn’t care. Sporting Life columnist Tony Morris wrote: “God’s in his heaven, Lester’s won the Derby and all’s right with the world!”

Not with my world. I’d made win and place bets on 20-1 shot Carlingford Castle, who like Teenoso loved soft ground. I had considered boxing them in an exacta but decided against it.

Carlingford Castle ran second, so I made a small profit, but when I saw the two-pound exacta was worth 114 pounds (about $172), I started beating myself up. Nothing stings more than missing out on a score, and 37 years later the regret is still there.

It also was a rough day for the father of Frankie Dettori, then only 12 but destined to replace Piggott as England’s hero on horseback. Gianfranco Dettori, a 13-time champion rider in Italy, finished ninth in the Derby and was unseated later in the card. It was a wasted trip from California for all-time great Bill Shoemaker, who came in 16th of 21.

Shortly after the final race, elegantly attired drunks began brawling under the grandstand. How very un-British. Stiff upper lip? More like split upper lip. Champagne bottles shattered as men in top hats and tails pummeled each other while rolling around in broken glass and pools of Mumm’s.

I couldn’t resist goofing on the absurd scene, yelling “Bloody hell!” in my best English accent. Jean feared I’d be dragged into the scrum and insisted on leaving immediately.

We headed for Tattenham Corner Station, which shares the name of the downhill run to Epsom’s stretch. The quickest route was across the water-logged turf, which was taking prisoners.

The high heels of many fancily dressed women got stuck, and some came off. Some had been drinking all day, and watching these barefoot ladies stagger uphill was a jolly good show.

The train to London was an unexpected multicultural experience. We ended up sitting among bizarrely dressed people jabbering in Cockney accents.

I spent my first 10 years in a New Jersey neighborhood among immigrants from Italy, Hungary, Poland and Puerto Rico, so I was familiar with broken English. Cockney slang was way more challenging.

I made the mistake of trying to start a conversation, which amused these London East Enders. They must have wondered where I got that accent. I asked their elder statesman “What did you think of the Derby?” I couldn’t understand a word of his animated reply, which may have referred to money (“bees and honey”), “gay and hearty” (a party), “box of toys” (noise) or “tick tack” (the track). Too bad, because every few seconds he and his friends began roaring with laughter.

A drunken brawl, women slogging through a bog, and English as a foreign language. Yes, travel really does broaden you.