Second Season Shaping Up On the Road to the Kentucky Derby 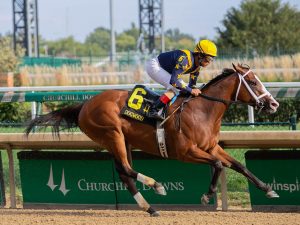 Taking the next step on the road to a Kentucky Derby in September, Churchill Downs released a preliminary list of Derby points-qualifying races pending approval by tracks and subject to scheduling changes.

Talk about preliminary! But with horse racing starting to re-open at major tracks, such as Churchill Downs on Saturday, and hopefully Santa Anita Park shortly, Tuesday, May 12, became the time to set a second season of Derby preps.

The first race in the extended series is the Matt Winn Stakes (G3) on May 23 at Churchill. The new points structure is 50-20-10-5 for the first four finishers rather than the previously announced 10-4-2-1 allotment.

Meanwhile, neither the postponed Preakness nor the Belmont Stakes – the second and third legs of the Triple Crown – have set new dates, and there is still no racing in New York due to the coronavirus pandemic.

The 146th Derby, traditionally run on the first Saturday in May but was postponed because of the coronavirus outbreak, is scheduled for Sept. 5.

Here are the races, tracks, dates where available, and qualifying points (when/if racing resumes in New York, other races could be added to the series):

Multiple adjustments could be made. First, host tracks must approve the placement of the races Churchill has designated.

“We’re in the midst of an unprecedented year, and this year’s Kentucky Derby and Triple Crown will be one of the most memorable of our lifetimes,” Churchill’s Executive Director of Racing Mike Ziegler said in a statement.

“There are a lot of moving parts and there are still a lot of unanswered questions, including who will be running and when. We’ve had great conversations with our partner racetracks and believe we’ve identified the best extension to a most unique Road to the Kentucky Derby. This will continue to evolve, including date placement, as host tracks firm up their plans.”

With horses and trainers flocking to Churchill Downs, there is much more interest than usual in the meet. Which is why the stakes have been raised for the Matt Winn.

“Based on measured interest from horsemen and limited racing opportunities for 3-year-olds across the country, the Matt Winn at the home of the Kentucky Derby appears to be the lone race in May on the national calendar for horsemen to use as a prep to possible important stakes engagements in mid-to-late June,” Ziegler said. “For that reason, we’re pleased to be able to fill the void and raise the significance of the Matt Winn.”

Should the Preakness and/or the Belmont Stakes be rescheduled to take place before the Derby, those races would become Derby qualifiers with a point scale of 150-60-30-15 to the first four finishers.

Churchill Downs also said adjustments will be made to the European and Japan roads to the Derby in the next few weeks.

In addition, new qualifiers for the Kentucky Derby Oaks on Sept. 4 have been added.

For mathematicians, good luck figuring out what it will take to make this year’s field. The field is limited to 20 starters, so it’s the top 20 point-earners who earn a spot in the starting gate. A year ago, the No. 20 point-getter had 38 points, and Tacitus was the leader at 150.

As the second season of preps kicks off in a few weeks, the current points leader is unbeaten Nadal with 120; No. 20 is Finnick the Fierce with 25.