With Risk Taking joining stablemate Crowded Trade in the Preakness field, owner Seth Klarman and trainer Chad Brown now have two shots at winning the second leg of the Triple Crown for the second time.

In 2017, the owner/trainer combo won the Preakness with Cloud Computing – the four-time Eclipse Award winning trainer’s lone victory in a Triple Crown race. 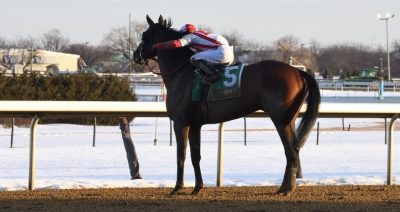 After a win in the Withers (G3) established this son of Medaglia d’Oro as a Kentucky Derby contender, he finished seventh in the Wood Memorial (G2) after a bobble at the start and a wide run around the track.

Skipping the Derby allowed Brown and his team to regroup, and Risk Taking responded with a pair of impressive works at Belmont Park over the past two weeks. Jose Ortiz, one of the nation’s top jockeys, has the call as he seeks his first Preakness win.

With an outside post, Brown figures there’s enough speed in the race with the likes of favorites Medina Spirit and Concert Tour that “hopefully, the field gets strung out a little before the first turn and he (Risk Taking) can drop in. Just let Jose work out his trip from there.”

Risk Taking was a late scratch last weekend’s 1 1/8-mile Peter Pan (G3) at Belmont Park, with Brown figuring the two-turn Preakness might be a better fit, not to mention the $1 million purse.

“It was a huge factor along with the distance of the race,” Brown said. “I think the longer the better for him. Both of his wins are around two turns, and I didn’t want to change anything.”

Notes: On May 1, Risk Taking worked 5 furlongs in 1:00.34, and followed that up on May 8 with a 5-furlong work in 1:01.76, both at Belmont Park. “His last two works were the best we’ve seen,” Brown said … Ortiz will ride in his fourth Preakness, his best previous finish was fourth aboard Good Magic (trained by Brown) in 2018 … Klarman and William H. Lawrence co-owned 2017 Preakness winner Cloud Computing.