Raging Bull came charging down the stretch and blew past the leaders for his first victory in more than 20 months, capturing the $300,000 Shoemaker Mile (G1) at Santa Anita on Monday to earn an automatic berth in the Breeder’s Cup Mile (G1) at Keeneland on Nov. 6.

Trained by Chad Brown (of course), the 5-year-old bred in France was making his first start since running third in the Woodbine Mile Stakes (G1) back on Sept. 14, 2019. The Peter Brant-owned horse was 0-for-5 – all in Grade 1 races – coming into the Shoemaker Mile, but was clearly the best in beating Next Shares by 2 ¼ lengths over a firm turf course.

War of Will, the 2019 Preakness (G1) winner, finished fifth but broke inside from the No. 5 post, bumped a rival and was disqualified to sixth. Next Shares, who did not get off to a great start, also finished with a rush to claim second under John Velazquez.

Without Parole, the 2-1 favorite also trained by Brown, was third, followed by River Boyne, War of Will (placed sixth), True Valour, Neptune’s Song, Blitzkrieg, Voodoo Song and March to the Arch. 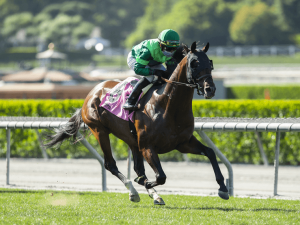 Raging Bull broke from post No. 7 and was well back in the field after three-quarters of a mile, but came out four wide on the second turn and rallied strongly for his sixth win in 13 career starts, along with two seconds and two thirds to bring his earnings to $1,100,750.

“He broke well and it looked like there was a good pace, he was very controlled,” said Rosario, who has now ridden Raging Bull in 11 of his 12 starts. “He just came with his run like he does all the time. He put in a nice run. It’s beautiful, nice to be back here and be back in action.”

Next Shares was bumped hard out of the gate by War of Will, but recovered and made an impressive late run for second. Sent off at 18-1, he returned $14.20 for a $2 place bet).

“The plan was to be mid-pack with this horse, but we got wiped out at the start, so we were way back,” said Velazquez. “He still ran a great race.”