Sometimes you don’t need to be a math wizard to know a good maiden claiming race when you see one.

Thousands of races for maiden claimers have been run all over North America at every level in the year since Race 10 at Gulfstream Park on Thursday, Dec. 20, 2018. None, however, proved to be more productive than that $16,000 maiden claimer run at 6 ½-furlongs on the main track for soon-to-be 3-year-olds.

Gulfstream’s 10th race for maiden claimers on Dec. 20 was won by Maximum Security in his first career start. He escaped being claimed that day and of course later went on to win the Florida Derby (G1) and cross the finish line first as much the best in the 2019 Kentucky Derby (G1). The former maiden claimer is on the verge of winning the Eclipse Award as outstanding 3-year-old of 2019.

It is rare that a horse who raced as a maiden claimer ever goes on to become a Grade 1 winner, but it happened twice in 2019 with a second former maiden claimer achieving Grade 1-winning status. And not only did it happen twice, it happened to another horse out of the same race – Race 10 at Gulfstream on Dec. 20.

That race was won by 9 ¾ lengths by Maximum Security, and the third-place horse that day, beaten 10 ¾ lengths, was none other than Math Wizard, who became a Grade 1 winner on the strength of his surprise victory in September’s Pennsylvania Derby. 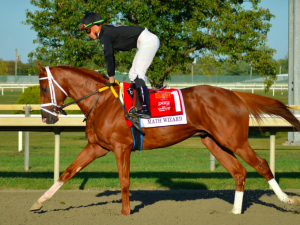 Unlike Maximum Security, Math Wizard was, in fact, claimed out of that race by Antonio Sano from trainer Daniel Sanner. He then entered right back in a $16,000 maiden claiming race on Jan. 6, where he graduated and got claimed again, this time by Paul Kopaj. Then Kopaj entered and won a $25,000 claiming race by 18 lengths in the horse’s next start, from which Math Wizard got claimed yet again, that time by current trainer Saffie Joseph, Jr., for owner John Fanelli.

Math Wizard has never been entered in another maiden race. Instead, he is back at the scene of his early career victories at Gulfstream Park, and is among the invitees to the $3 million Pegasus World Cup (G1).

Following that 18-length claiming victory, Math Wizard was winless until the Pennsylvania Derby, but even so had already more than paid for his $25,000 claiming price, racking up over $200,000 for the new owners with graded stakes finishes, including a second in the Ohio Derby (G3), a third in the Indiana Derby (G3), and a fourth in the Wood Memorial (G2), not to mention another $600,000 for the Pennsylvania Derby score. You don’t need to be a math wizard to see that the former $16,000 maiden claimer has now achieved millionaire status.

What are the chances of Gulfstream’s Race 10 on Dec. 20, 2018 producing another Grade 1 winner? Well, the odds of that happening are probably even longer than the long odds the race has already overcome. Guerreron, the runner-up in both Maximum Security’s and Match Wizard’s maiden claiming wins has gone on to graduate since then, and just scored his second career win in a claiming race at Tampa Bay Downs on Jan. 3. Currently trained by Kathleen O’Connell, Guerreron now owns a career record of two wins, three seconds, and three thirds from 19 career starts for earnings of $47,750. It’s a record much more befitting a former maiden claimer.