No Black-Eyed Susans This Year, but Live Racing is on the Menu

A year ago, and a little under 24 hours before a most bizarre 144th running the Preakness Stakes, my wife and I were seated at our favorite outdoor table at the wondrous Woodberry Kitchen, a 10-minute drive from Pimlico 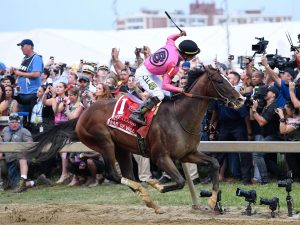 A Cuba Libre for me, an Old Fashioned for Jenny. And a dozen fresh oysters. Make that two dozen. So began a few hours of sipping, slurping and supping (and OK, some smooching, too), as we schmoozed away the night reminiscing about fond memories of Preakness Pasts:

A thunder, lightning and rainstorm of epic proportions at the start of American Pharoah’s win in 2015.

Afleet Alex, who was bumped turning for home, drops to the point where his knees are barely off the ground and miraculously regains his balance and wins in 2005.

On Preakness Day 1999, a fan runs onto the track during an undercard race and swings and misses in an attempt to punch Artax – a horse! The puncher is arrested. No riders or horses were hurt.

An afternoon power outage at Pimlico is a huge disruption (especially trudging up and down multiple flights of steps in sweltering heat) before Real Quiet wins the second leg of the Triple Crown in 1998.

We can keep going, but let’s fast forward to last year, when a most remarkable set of circumstances occurred.
Dinner a success and nightcaps in our hotel courtyard led to a good night’s sleep.

On to the Preakness, but a bit of stage-setting. Two weeks earlier, Maximum Security had finished first in the Kentucky Derby but was disqualified to 17th for interference in the stretch – the first time this scenario occurred in Derby history. Country House, who finished second, was declared the winner after a long steward’s review. Lawsuits followed.

Neither Maximum Security nor Country House showed up for the Preakness, nor did the horses who officially finished second and third, Code of Honor and Tacitus. It marked the first time since 1996 (Grindstone, knee injury) that the Derby winner did not start in the Preakness.
And then the gates opened.

Bodexpress promptly reared and unseated Hall of Fame rider John Velazquez, then galloped around the track with the field, creating a great deal of concern for the safety of horses and riders.

War of Will, who was part of the Derby interference scenario that might have cost him a chance at victory, came through with a victory in the Preakness, giving popular trainer Mark Casse his first win in a Triple Crown race. It all made for a great story.

The coronavirus pandemic has forced the world to look at a new normal way of life, and the United States is having a terrible time of it (more than 85,000 COVID-19 deaths), just like many other countries. The economy has tanked. Sports are shut down. Unemployment is at historic highs.

But while there is no Preakness this weekend, there is live horse racing (without spectators) and lots of races at a bunch of tracks to wager on. After meeting federal, state and local health and safety standards regarding the coronavirus, Churchill Downs re-opens on Saturday; Santa Anita Park has opened, Golden Gate Fields is running; so is Gulfstream Park, Tampa Bay Downs, and a few others around the country are re-opening as you read this.

On Saturday (May 16), there will be a livestream event (6-7 p.m. ET) featuring past runnings of the Preakness hosted by NBC Sports’ Laffit Pincay III and XBTV’s Zoe Cadman. You can find it at Facebook.com/Preakness.

“The 1/ST Preakness At Home represents our company’s vision to expand and deliver unique entertainment and horse racing content to a new and wider audience,” Belinda Stronach, 1/ST chairman and president, said in a news release. “The coronavirus pandemic changed the Preakness celebrations this year, but it gave us the opportunity to enhance an already incredible event and to imagine what new traditions could be incorporated into the Preakness of the future. We look forward to being back at Pimlico when it is safe to do so.”

The livestream follows NBC’s broadcast of a look at American Pharoah’s run to the Triple Crown beginning at 5 p.m., highlighting his Preakness victory. During the one-hour show, the new date of the Preakness will be announced, according to a press release from The Stronach Group, which owns Pimlico.

New York racing has yet to re-open, but the Belmont Park main track opened this week for training. The New York Racing Association is close to meeting all criteria needed to re-start live racing and an announcement on an opening day could be forthcoming. 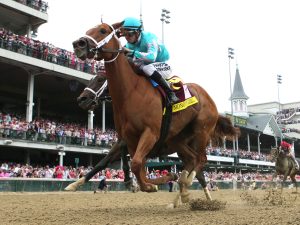 While I’d like to be saying “Hi Ho Pimlico,” eating crab cakes and picking up groceries at Wegmans, I’m glad they’re off and running at Santa Anita and Churchill Downs.

Casse, recently elected to racing’s Hall of Fame, is among many of the busy trainers getting horses ready to race. Sir Winston, his surprise Belmont Stakes winner last year, trained over the Belmont track on Friday, and Casse sends out Got Stormy on Saturday at Gulfstream Park in the $75,000 Powder Break on the turf.

Cox is in his usual Barn 22 with a string of about 40 horses.

“Really not a lot has changed from a training perspective (during the COVID-19 pandemic),” Cox said. “We sort of experienced racing without fans at Fair Grounds and Oaklawn. It’s definitely a different atmosphere but we’re back home and thankful to get racing started at Churchill Downs.”

Santa Anita officials had been in discussions for weeks with the LA County Health Department about re-opening.

“We are very grateful for the open and continuous communication with both the Health Department and Supervisor Kathryn Barger’s office,” said Aidan Butler, executive director of California racing operations for The Stronach Group. “Supervisor Barger in particular, understood the importance of live racing to support thousands of individuals, and that we are able to accomplish it safely under these protocols.”