Kentucky Derby During WWII: Tales of Tanks and Turtles, Stories of Streetcars and Segregation

A horse afraid of the dark, the original streetcar named “Desire,” a field of turtles racing, and a Derby horse owner prohibited from staying in any Louisville hotel are among the least-told stories about the Kentucky Derby.

They are worth retelling during this time of COVID-19, when the novel coronavirus has led to postponement of the Derby until September.

This will not be the first time the Derby has been postponed. Anyone who considers the first Saturday in May to belong historically and exclusively to Churchill Downs must be unaware that a turtle derby substituted for the horse race on the traditional Derby Day in 1945. The Kentucky Derby was moved that year from the first Saturday in May to June 9. The turtles raced for their roses Saturday, May 5, when the horses normally would have run.

Postponement of the horse race came out of a wartime ban on horse racing effective Jan. 3, 1945. The director of the national Office of War Mobilization, Jimmy Byrnes, theorized that racing was a waste of valuable resources such as gasoline and the rubber used for tires on the vans that moved horses from track to track. Churchill Downs, however, did not want to give up the Derby. Just like happened this year, word spread that the track was considering hosting the Derby without spectators.

Luck intervened and changed everything. Germany surrendered May 7, the first Monday of May, which cleared the way for Churchill Downs and other tracks to reopen. Derby trainers insisted they needed time to condition their horses and so Churchill postponed the race until June.

Still, the people of Louisville were accustomed to having a derby on May’s first Saturday, which in 1945 was May 5. Since racing fans felt they could not wait for a June Derby, some residents substituted with a race of a different sort. The Kentucky Turtle Derby was raced for a charity (then called the Kentucky Society for Crippled Children) held with betting at the Jefferson County Armory. A crowd of 6,500 attended and put up $11,483 in wagers on eight races. The distance for each race was 20 feet.

The Turtle Derby was the final race on the program. The winning testudinate was named Broken Spring and he (or she) lumbered through the 20 feet in a remarkable time of 1:20.3. In the turtle world, that’s a high speed rating.

The most exciting race was not the Derby, it turned out, but the fourth event on the card. According to a retrospective published in the Louisville Courier-Journal, five of the seven turtles who held the lead at different points during the 20-foot distance all turned around and headed back to the start. Journeyman Printer, the winner, lumbered home in a dawdling 4:59.1. Even in turtle world, that’s slow.

The Kentucky Turtle Derby, born out of wartime hardship, continued into the 1950s. And then everyone forgot about it. 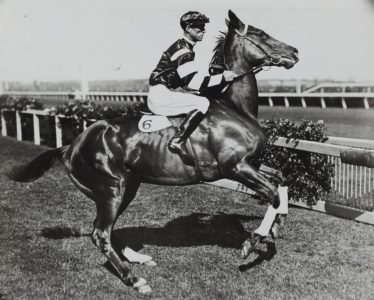 Winner of the horse version of the 1945 Derby was Hoop Jr., owner Fred Hooper’s first thoroughbred purchase. Consider how difficult it must have been to handicap that race run in June following five months of no racing. The Blood-Horse commented, “Because of the confusion brought about by the hiatus in racing, there was less than the usual amount of dependable information as to the comparative class and condition of the horses.”

Worse, it had rained a lot, including on the morning of the race, turning the track deeply muddy. Few knew which horses would be suited to the muddy track. Hoop Jr. was. Racing on the lead to finish ahead by six lengths, he paid $9.40 to win with Eddie Arcaro up.

The federal order shutting down all horse racing early in 1945 was the culmination of a lengthy attempt to shutter the sport for wartime reasons. Churchill Downs managed to remain open longer than others, largely due to track president Matt Winn’s demonstration of wartime solidarity.

Winn converted the infield to housing for about 400 soldiers, mostly in tents. He opened the infield to parking for Sherman tanks. Churchill Downs raised about $120,000 for the Louisville War Fund. Winn hosted the Kentucky State Fair in 1944 and 1945 in the track’s infield, as the fairgrounds had been converted for use in manufacturing of munitions. All these good-faith efforts kept Churchill Downs open for racing, at least until the end of 1944.

Despite Winn’s efforts, the Derby nearly did stop, beginning in 1943. With travel bans in force, it was becoming increasingly difficult even for local spectators to get to the track. Automobiles and taxicabs were not allowed within one mile of Churchill Downs, as Kimberly Gatto has written in her book, “Churchill Downs: America’s Most Historic Racetrack.” Special Derby trains from out of town had stopped in 1941, the year the United States entered the war. Then, Winn came up with an idea to save the race.

He restricted Derby attendance to locals. He asked box holders from out-of-town to donate their seats to the armed forces. He asked Louisville residents to ride the street cars to the track, rather than arrive in automobiles. The 1943 Derby became known as the Streetcar Derby, perhaps anticipating the title of Tennessee Williams’ A Streetcar Named Desire that opened on Broadway in 1947. Everyone in Louisville desired to ride the streetcars to this Derby and Winn made the Derby possible.

The winner was Count Fleet, who went on to win the Triple Crown and sire the 1951 Kentucky Derby winner, Count Turf. Ironically, Count Fleet’s owner, John D. Hertz, had founded the Yellow Cab Company (and later, the Hertz rental car empire). Hertz’ history of founding Yellow Cab was ironic, since cabs, most of them Yellow Cabs in those days, were not allowed anywhere near the track for this Derby that Hertz won.

Count Fleet was the horse afraid of the dark. This “shameful secret,” as Peter Chew called it in his book, “The Kentucky Derby: The First 100 Years,” contradicted Count Fleet’s aggressive behavior on the track. He remained aggressive and unpredictable even in retirement. But the little-known side of Count Fleet was his timidity at night, his fear of the dark, according to the manager of the farm where he retired.

Louisville was still very much a southern town in 1943, renowned for its southern customs. The dark side of these traditions was racial segregation, which takes us to the story of another colt who ran in the 1943 Streetcar Derby, Burnt Cork. His owner was Edmund Lincoln Anderson, better known to Americans of that era as Rochester, the African-American comedian who starred with Jack Benny on their regular radio and television shows.

Anderson managed to get to Louisville to watch his horse run, but he did not enjoy Derby City the way others might have. He and his wife and his valet stayed in a private home because Louisville hotels were segregated: they would have denied him entrance despite his fame. His horse’s name, Burnt Cork, referred to the blackface makeup worn by whites imitating blacks in minstrel shows. Some African-American performers also wore “burnt cork,” so perhaps Anderson was referencing minstrel shows in general. Still, he could not have stayed in a major downtown hotel for his Derby visit.

Churchill Downs reprised the Streetcar Derby again in 1944, when Pensive won for owner Calumet Farm. Perhaps Winn and the fans arriving by streetcars wondered how long the Derby would survive under wartime restrictions. They must have wondered about the future of their sport. Even the concessions at Churchill Downs felt the war’s effect: meat and sugar shortages along with food rationing diminished the Derby experience for fans.

V-E Day, May 8 1945, was the first step in setting the world right again – and returning the Kentucky Derby to its traditional course.