Kentucky Derby Top 10: Tiz The Law Lives Up to No. 1 Status

Tiz the Law has done everything possible to stake his claim as the nation’s top 3-year-old with his victory in the Florida Derby (G1), and thus remains No. 1 on my usracing.com/news Top 10 Kentucky Derby list of contenders. 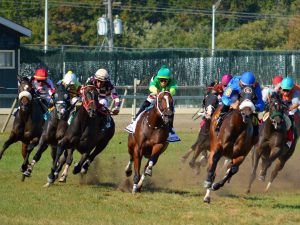 Sure, you could argue that two-time Triple Crown winning trainer Bob Baffert has a trio of undefeated colts in Authentic (No. 2), Nadal (No. 3) and Charlatan (No. 5). But who knows when or where — or if – they’ll be able to run again now that Santa Anita Derby (G1) scheduled for Saturday has officially been postponed?

With the Kentucky Derby rescheduled from May 2 to Sept. 5 because of safety measures regarding the coronavirus pandemic, there’s no telling what happens to the Run to the Roses, and the other Triple Crown races, the Preakness (G1) and the Belmont Stakes (G1), which have yet to be rescheduled from their May 16 and June 6 dates.

What we know now is Tiz the Law would likely be the horse to beat off a dominating 4 ¼-length win at Gulfstream Park on Saturday. The Florida Derby has produced seven first-place finishers from 2001-2019 in a Kentucky Derby that’s normally run five weeks later. Of course, this is not a normal year.

Barclay Tagg, who won the Derby and Preakness with Funny Cide in 2003, was pleased with the way Tiz the Law performed, and can only hope this son of Constitution continues to progress for the next four months. The day after the race, with his star back at Palm Meadows, Tagg said Tiz the Law “was very happy. He takes life easy.”

It’s been a smooth ride so far. After breaking his maiden at Saratoga in his first start, he took the Champagne (G1) at Belmont Park, and finished third in the slop in the Kentucky Jockey Club (G2), less than a length behind the winner. Wintering in Florida, the New York-bred opened his 3-year-old campaign by winning the Holy Bull (G3) by three lengths over Ete Indien, skipped the Fountain of Youth (G2), and was in perfect form for the 1 1/8-mile Florida Derby.

“He’s pretty much been the same,’’ Tagg said. “I don’t think he’s changed at all really. Whatever you ask him to do, he just does it.”

Since it’s impossible to make a plan for a Sept. 5 Derby at this point, there’s a chance Sackatoga Stables’ Tiz the Law could run in a few more “prep” races, likely in New York, in a rescheduled Wood Memorial and/or the Travers Stakes (G1).

For now, the Arkansas Derby (G1), rescheduled from April 11 to May 2, is the only remaining official points qualifier and it could have field that includes Charlatan, Nadal, Wells Bayou and Sole Volante.

Tiz the Law, meanwhile, sits atop the Derby qualifying points leaderboard with 122 and has a guaranteed spot in gate, along with the likes of Louisiana Derby (G1) winner Wells Bayou (104 points), and Fountain of Youth (G2) winner Ete Indien (74), among others.

All went smoothly in the Florida Derby after an eight-week break following Holy Bull win … Back at Palm Meadows, where Tagg will try to keep his colt in top shape until a race comes up … No. 1 on points leaderboard (122) … Next start: TBD … Derby Future Wager Odds: 6-1.

Worked 6 furlongs in 1:12.40 at Santa Anita on March 29 … Won San Felipe gate-to-wire, dusting off three other Derby prospects … 3-for-3 and was prepping for now postponed Santa Anita Derby on Saturday … No. 5 on points leaderboard (60) … Next start: TBD … Derby Future Wager Odds: 8-1.

Louisiana Derby winner could show up next in Arkansas … Derby sport clinched, and Cox hopes to have his first Derby starter, whenever the race takes place … Winner in 3 of 5 races, but ran seventh at Churchill Downs late last year … No. 2 on points leaderboard (104) … Next start: Arkansas Derby, Oaklawn Park, May 2 … Derby Future Wager Odds: 30-1.

Won allowance optional claiming race by 10 ¼ lengths at Santa Anita on March 14 … Needs Derby qualifying points – he has zero — but has plenty of time to get them … Next start: Arkansas Derby, Oaklawn Park, May 2 … Derby Future Wager Odds: 8-1.

Back in training after a foot bruise knocked him out of the BC Juvenile … Son of Derby winner Street Sense had last timed workout March 14 – 5 furlongs in 1:01.80 at Palm Meadows … Won Breeders’ Futurity in last start, back in October … Plenty of time get his game back on if he stays healthy … No. 29 on points leaderboard (10) … Next start: TBD … Derby Future Wager Odds: 20-1.

Set to be reunited with regular rider Luca Panici when next race comes up … Runner-up in Tampa Bay Derby in last start … No. 14 on points leaderboard (30) … Next start: Arkansas Derby, Oaklawn Park, May 2 … Derby Future Wager Odds: 30-1.

If you enjoyed our most recent Kentucky Derby Top 10, check out other articles at our horse racing news section!