Kentucky Derby Betting Prep Races: Since first contested in 1982, the El Camino Real Derby has endured its share of challenges, but it has still managed to remain a strong West Coast-based prep for the Kentucky Derby (G1). The race was first contested at Bay Meadows, and was then moved to Golden Gate Fields for the 2009 running after the former racetrack was shuttered in 2008. 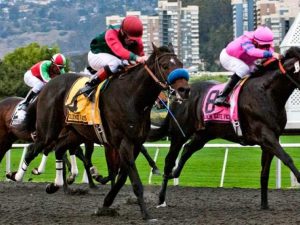 In the years since then the El Camino Real Derby has undergone surface changes from being contested over a dirt surface to a synthetic one and then a downgrade from graded status, yet it still stands as one of the California races to offer points on the Road to the Derby challenge (10-4-2-1) and also draws top horses whose connections want to wear the blanket of roses in 2 ½ months.

Hall of Fame trainer Ron McAnally sent out the first El Camino Real Derby winner, Cassaleria, who was 13th in the 1982 Kentucky Derby before winning the Longacres Derby (G3) later that summer.

Since then, some of the more notable names to win the nine-furlong event include:

A year ago Anothertwistafate won this race before picking up a second in the Sunland Park Derby (G3), but he didn’t make the Derby cut despite winning the Lexington Stakes (G2) at Keeneland and hasn’t been seen since his disappointing 10th-place finish in the Preakness Stakes last year.

Now retired Hall of Fame jockey Russell Baze, still North America’s winningest jockey of all time with 12,842 victories, holds the record for riding the most winners of this race with nine and fellow Hall of Fame Jerry Hollendorfer, who remains banned from participating at all Stronach Group properties, has saddled a record six winners throughout his career.

The El Camino Real Derby is also one of just two Kentucky Derby prep races in North America contested over a synthetic surface, the other being the Jack Ruby Steaks (G3) at Turfway Park in mid-March.

This year the El Camino Real Derby has been set as the 7th and will leave the gate at 3:45 p.m. PT. Following is the field of ten, with riders, trainers, morning line and pedigree:

Register now for an account with UsRacing.com, and start getting your Kentucky Derby Betting Prep Races action now!