When you ask someone what the Holy Trinity is you are bound to get more than one answer.

If you are religious you may likely answer that it is the Father, t 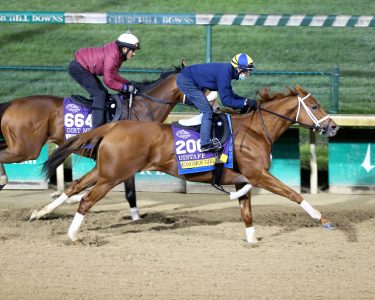 e Son, and the Holy Ghost. If you prepare Cajun and Creole cuisine, your response is going to be white onion, green bell pepper, and celery. For many horse racing enthusiasts, they will say it is the Triple Crown, the Kentucky Derby, the Preakness Stakes, and the Belmont Stakes.

However, if you ask someone who makes their living playing the races you will get a different answer. One gentleman I know from my misspent youth on the grandstand apron at Monmouth Park would answer with contenders, strategy, and money management.

Is it really that simple?

I have often felt that I haven’t lived up to my potential as a horseplayer. I do well handicapping the races but seem to never maximize my betting. My wife even jokes that while I am a great handicapper, she is a better bettor. I play my contenders and do well, but my wife is less risk adverse and will find ways to hit the exactas and trifectas that I avoid.

Let’s look at each part of the “Holy Trinity of Horseplaying.”

During my evenings spent in the old Meadowlands grandstand on the second floor, Bruce the Mathematician loved to play horizontally, or play multi-race wagers like the daily double, pick 3 or pick 4. He was the kind of horseplayer that kept a watchful eye over his bankroll and was good at avoiding the biggest pitfall for horizontal players, the dreaded winning a bet but losing money on it.

For all the positives that Bruce the Mathematician brought to his approach to wagering, he did have an Achilles’ heel. He didn’t have the right contenders in his pick 3s and pick 4s to win as regularly as he wished. Night after night he would be swapping tales of woe with anyone who would listen, especially our mutual friend Fernando. Tickets in hand, he would rifle through them as the two would commiserate together, “three of four here, missed the second leg on that one, key horse blew it there.”

If you can’t string winning races together, you are never going to win you horizontal bets.

When I started playing targeted pick 4 wagers, I looked back to see how I would have performed on paper using my contenders in consecutive races. This accounted for no strategy regarding passing on races that would potentially return less than what was optimal. Based on my old races, I would have hit about 20% for a decent return on investment.  I wasn’t content with that though and decided to take my analysis one step further.

Why am I more profitable in pick 4s where I am confident in three of the four instead of all four races? That non-confident race is the one where I hit the “all” button or spread my picks a little deeper with longer odds horses. When I am confident in all four legs, chances are I don’t have too many longshots on that ticket.

To cash your wagers, you need to have the right horses and pick your spots.

This is where Bruce the Mathematician excelled. Despite not having the right contenders he had a method for computing probable payouts for pick 4s based on morning line odds of each of his contenders. This allowed him to weigh the number of overall combinations on his ticket against the potential payout of each combination. This approach ensured that he wouldn’t lose money on the bet while winning the ticket and allowed him to assess how risky the overall wager was.

Blindly betting all your contenders in a race with a lot of favorites on your ticket often is more risk than reward.

Bruce the Mathematician, like many horseplayers I know, had built a sizable bankroll over the course of his career.

How did he do it?

Sound money management and a little bit of luck. Bruce methodically tracked his bankroll and made sure that his dabble in horizontal wagering wouldn’t hurt his bottom line. He made sure that his normal straight wagering was not interrupted, and he set aside a few bucks to use for horizontal play. If the size of a pick 4 wager grew too large against the likely return and his bankroll, he knew to pass on the opportunity.

For every winning horseplayer there is out there, there is a unique approach to money management. There is no “one size fits all” approach. Each horseplayer needs to find what works based upon their strengths and style of play. The common threads for all successful horseplayers though are that they can account for every penny of their bankroll, they track their results, and stay disciplined.

The next time you think about placing a wager on the ponies, pray to the horse racing gods and remember to use the Holy Trinity of Horseplaying. By considering contender selection, strategy, and money management, you will find your bankroll growing in no time.