Perhaps Al Stall, Jr. put Saturday’s Breeders’ Cup Classic’s star-studded field into the best perspective, when, after thinking it over for a few seconds, he came up with this comment:

“This is rarefied air,” said the trainer who should know – he sent out Blame to upset the mighty Zenyatta in the 2010 Classic. “This should be a dynamite horse race, a bunch of top animals in good form.”

You’re not kidding, Al. Stall plans to be right in the mix with 7-year-old Tom’s d’Etat (6-1), a warrior who has overcome injuries throughout his career to become one of the top older horses in the country.

With careful handling and patience, Stall and his team have the Clark Handicap (G1) and Stephen Foster (G2) winner ready for the 20th and final race of his career.

“I’m excited,” said Stall. “At age seven, it is enough. And I’m really excited that he has an excellent place to go at WinStar [Farm]. There won’t be any heads down.”

Stall’s not the only one excited about the $6 million Classic (G1) at Keeneland. Three-time Classic winner Bob Baffert has a trio of horses in the 1 ¼-mile race – the 14th and final BC race of the two-day, $31 million Breeders’ Cup.

Start with Improbable, the 5-2 morning-line favorite coming off three Grade 1 wins – the Whitney and Awesome Again the most recent. Then there’s Kentucky Derby (G1) winner Authentic (6-1), who finished second in the Preakness (G1) on Oct. 3 in racing’s reshuffled schedule due to the COVID-19 pandemic. And finally, there’s star-crossed Maximum Security (7-2), the first-place finisher in the 2019 Derby but DQ’d to 17th for interference.

“The Classic horses are pretty powerful horses,’’ Baffert said this week. “I’ve never been this strong before in the Classic. Usually, I’d be happy to have just one of those in the Classic. To have three is amazing.”

Back to the Classic. Let’s not forget the sensational 3-year-old Tiz the Law, winner of the Belmont Stakes (G1) and Travers (G1) before a runner-up finish to Authentic in the Derby.

Under the care of Barclay Tagg, Tiz the Law has been training lights out for the Classic and is the second betting choice on the morning-line at 3-1.

“It’s been a strange year,’’ said Jack Knowlton, operating manager for owners Sackatoga Stable. “We’ve had a great year. There is a little disappointment with the Derby, but everything before that was perfect. Hopefully, we can cap it off with a big race here.”

The draw for the race on Monday (Nov. 2) added more intrigue – all three of Baffert’s horses will leave from outside posts. Improbable departs from the eight hole, Authentic from nine, and Maximum Security from 10.

“Max” and Authentic are front-runners and will need clean breaks and expert handling to get into a winning position. Luis Saez will be aboard “Max” and Hall of Famer John Velazquez has the call on Authentic. Improbable, more of a stalker, will be ridden by Irad Ortiz, Jr. (who was aboard for the Whitney win).

“These riders are going to be on their own,” said Baffert. “It all depends on the break. The riders know their horses, and they’re just going to play the break.”

Tiz the Law, meanwhile, leaves from the No. 2 post, not the best place, but as some trainers have noted, it may be OK to be away from Improbable, a quirky colt who flipped in the paddock while being saddled and was scratched out the Preakness. 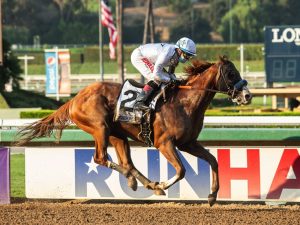 By My Standards, trained by Bret Calhoun, ran second to Improbable in the Whitney and went on to win the Alysheba (G2) in his most recent start with his stalking style. He’s 6-4-2-0 in 2020. Nothing to sneeze at.

Global Campaign won the Woodward (G1) in his last start, but the field was not a strong one. The 4-year-old son of Curlin will be ridden by Hall of Famer Javier Castellano, a rider you can never count out in big races.

That leaves us with Tacitus, a winner of nearly $3 million but still looking for a first Grade 1 win for Hall of Fame trainer Bill Mott. The 4-year-old son of Tapit has a Suburban (G2) win, but was second in the c and third in the Jockey Club Gold Cup (G1) in his previous two starts. His career record is 14-4-4-3. He’s a closer who in recent starts has been up near the leaders. cz has the mount leaving from the inside post.

“The rail is no problem,’’ said Ortiz. “I could be forward, but he will likely sit mid-pack and try to make one run. There should be a fast pace this time and I think he will run his race. Tapits get better with age and racing, so hopefully he runs his best.

Preakness winning filly Swiss Skydiver was under consideration to take on the boys again in the Classic, but owner Peter Callahan and trainer Ken McPeek made the call to run in the BC Distaff (G1) against females. The 3-year-old will be going against 8-5 morning-line favorite Monomoy Girl, 2018 winner of the Distaff and 3-0 in 2020 after being sidelined for 16 months.

The Breeders’ Cup is being held at Keeneland for the second time; the first was in 2015. With strict health and safety protocols in place, there will be no fans allowed at the track. Essential track personnel, as well as owners (in restricted numbers), will be in attendance.

The weather forecast is calling for sunny skies with temperatures in the 70s.