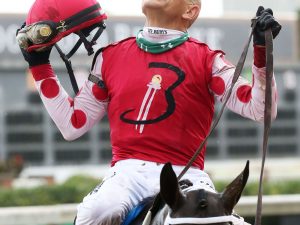 The Breeders’ Cup Classic, which is worth $6 million this year, is contested at the classic distance of 1 1⁄4 miles on dirt. It used to be the richest race in the world until the Dubai World Cup in 1995, then the inaugurual Pegasus World Cup, Prix de l’Arc de Triomphe and now the $20 million Saudi Cup.

Hall of Famer Bob Baffert leads all trainers with three winners – Bayern, 2014; American Pharoah, 2015; and Arrogate, 2016. Jerry Bailey and Chris McCarron each rode five winners to lead all jockeys. Tiznow in 2001 and 2002 is the only horse to have won the Classic twice and will remain the only one as last year’s winner, Vino Rosso, was retired and stood his first year at stud this year.

The fastest Breeders’ Cup Classic time belongs to Ghostzapper, who set the mark of 1:59:02 under Javier Castellano in 2004 at Lone Star Park. It is also remains the track record for the distance. In 2015 American Pharoah’s final time of 2:00.07 set a track record at Keeneland.

The Classic is responsible for more than just Horse of the Year Honors. The biggest upset in Breeders’ Cup history came when European import Arcangues stunned the Santa Anita Crowd at odds of 133-1 under jockey Jerry Bailey and returned $269.20 for a $2 wager.

Hall of Fame jockey Mike Smith remains the leading jockey in Breeders’ Cup history having won aboard 26 horses, ten more than second-leading rider and fellow Hall of Famer John Velazquez. Overall his mounts have earned an impressive total of more than $36.6 million. He’s ridden a total of 145 runners in Breeders’ Cup history starting with his first, Take Me Out in the Juvenile, in 1990.

Hall of Fame trainer Bob Baffert leads all trainers money earned (he’s saddled three Classic winners), but fellow Hall of Famer D. Wayne Lukas still owns the record for number of winners. Baffert’s first starter and winner was Thirty Slews, who won the Sprint in 1992. Lukas, who has sent out a record 167 Breeders’ Cup starters throughout his impressive career, including five in the very first Breeders’ Cup.