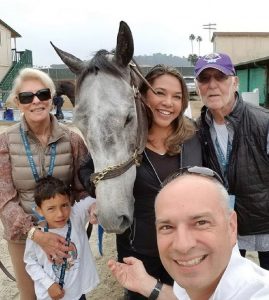 Michael House’s Grade 1 winner Hunt has been retired and the gelding will likely take up duties as a jumper for the owner’s 7-year-old grandson, Gabriel. The gray Irish-bred son of Dark Angel, who is also seven years old, made his last start in an allowance race at Santa Anita on April 28 where he finished seventh of eight as the 6-5 favorite. Immediately following the race a decision was made to retire him sound rather than subject him to claiming company and an uncertain future.

“Flavien Prat [Hunt’s regular jockey] got off him after the race and said, ‘I don’t think he wants to do this anymore,’” House’s daughter, Maggie House-Sauque said. “He hadn’t really been running like he used to and that was it. He was at my place [in Jumul, California] a few days later.”

Hunt was purchased privately by House-Sauque’s father in mid-2015 and imported to the U.S. after winning one of seven starts in Ireland. In 25 races stateside, all of which came in California, he won eight of 25 outings, which includes wins in the Shoemaker Mile (GIT), Eddie Read Stakes (GIIT), Del Mar Handicap (GIIT), Seabiscuit Handicap (GIIIT) and Siren Lure Stakes. Overall his career line stands at 32-9-5-3, $918,156. He was trained for all of his American starts by Phil D’Amato.

“Even though he was always pretty consistent he had a few issues here and there, but they were all resolved and this year we were hoping we’d have the old Hunt back,” House-Sauque said. “Plus, we were dealing with the weather issues and all of that, so we were hopeful. But in his last race, he got his perfect trip and was in a good position and didn’t do anything. At that point, we knew he was done and everyone was on board with the decision because it was the best one for the horse. We figured he’d probably be done by Del Mar anyway, but he said he was done a little earlier.”

Throughout his time as a member of the House stable, Hunt also became a member of the House family. Inherently kind with a calm demeanor — a bit atypical of a fit racehorse — the Houses’ visited him regularly, especially when he summered at their home track of Del Mar. The diminutive horse grew particularly fond of House-Sauque’s son Gabriel, so Hunt remaining in the family after his racing career was always the unspoken sentiment.

“It seems like it was always the plan to keep him in the family,” House-Sauque said.

And despite his barn demeanor, nobody knew how Hunt would take to retired racehorse life.

“I mean, I’ve [retired thoroughbreds from the track] my whole life and I have never had one act the way he has since he got here,” House-Sauque said. “He got off the trailer and walked around and didn’t scream like most do, getting all the other horses all worked up. We took him all over the property and exposed him to everything and he was interested, but nothing bothered him. We put him on the cross ties and slowly clipped him to them and he just stood there for as long as we wanted him to.

“The day after he got here my husband [former trainer Alex Sauque] got on him and rode him around and he was perfect. He didn’t look at anything, spook or wheel around like so many OTTBs do in a new environment. Alex just trotted him around and he was happy doing it. He even trotted him over a little ground pole. We even let Gabe [her 7-year-old] get on him for a bit to walk him around. He wasn’t afraid or spooked by anything.” 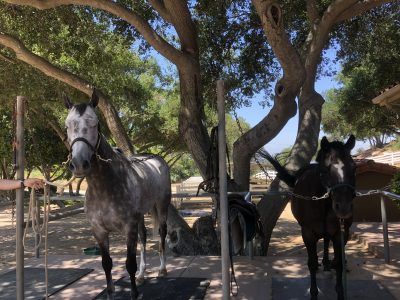 For now, though, Hunt will spend some time just being a horse and learning what it’s like to be an OTTB. Though the long-term goal is for him to become a jumper, House-Sauque said she is going to take things slow with him and take her time to transition him from racehorse to riding horse.

“We’ll eventually teach him to get up on the bit and how to be broke like a riding horse and get flexible, all the things he doesn’t know from being a racehorse,” House-Sauque said. “He’s in shape, so it’s not about that. He’s just learning new skills. I mean, honestly he just ran more than a week ago and only got here on Friday so we have time.

“It’s like he already knows what we’re asking of him and he wants to please us. When my son was riding him he said, ‘this is what Flavien Prat must feel like,’ which I thought was so sweet. If he ever has any problem we won’t push him because the reality is he doesn’t need to do anything, he’s done enough. This is all just cake and anytime he shows us he doesn’t want to do it, he doesn’t have to.”